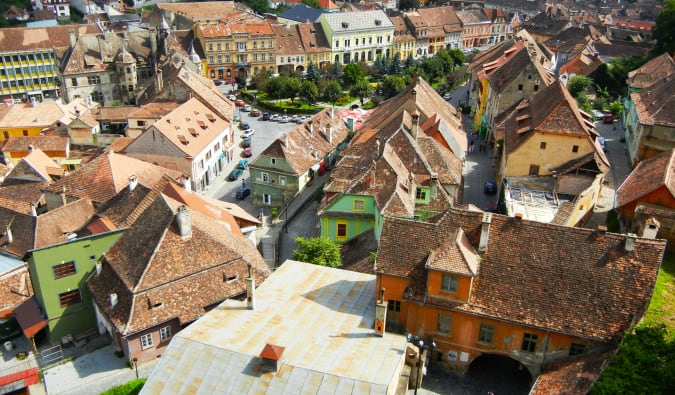 As I wandered around Sighisoara searching for coffins, bats, vampires, and human blood, I realized Romania wasn’t going to give me what I wanted: lots of cheesy Dracula tourism.

I’d been to Bran, explored Transylvania, and spent some time in Bucharest. So far, I had encountered nothing about vampires.

Vampire pop culture was peaking, with fan favorites like Twilight and True Blood hugely popular all around the world. Yet the Romanians just didn’t bother to capitalize on the vampire craze that was spreading around the globe.

I admitted defeat. I simply wasn’t going to get what I’d hoped for. I’d have to settle for the fact Romania had turned out to be an amazing place that far exceeded all my expectations.

It was as good a consolation prize as any traveler could get.

There may not have been vampire teeth in every shop, but the country had a lot to offer.

After Bulgaria, I had mixed feelings about going to Romania.

Bulgaria didn’t blow me away during my time there. I admit, it was better than I’d expected. But I didn’t really love it.

In my head, I assumed Romania would be similar to Bulgaria: a former communist, agrarian country with crumbling and bland Soviet-era buildings. There would be some nice medieval towns in the countryside, but overall, I didn’t have high expectations for Romania.

Yet, for the three weeks I was in Romania, I was constantly blown away by the country.

It was way more developed than I thought, the towns were historic and beautiful, the people were friendly, the food (though heavy on meat) was delicious, and the country exhibited a frenzied, “we’re on our way up” energy. 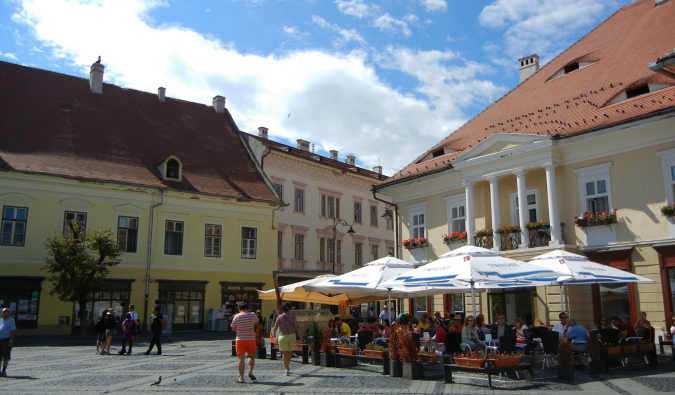 I started in Bucharest, which was a far more westernized city than I thought it would be. Instead of an old Soviet-era city, I found a city flush with energy, cafés, nice cars, beautiful parks, delicious international food, and lively nightlife.

I also enjoyed a wide range of architecture, from art deco to late 19th century Paris to, yes, those big, dull, grey communist buildings. The historic center had tons of great restaurants and cafés, too (though they were a bit expensive). There’s a certain sophistication and energy to Bucharest that I enjoyed.

This place used to be called the “Paris of the East” and it’s easy to see why. (The Romanians have this weird admiration for the French that I never expected. They seemed to try to copy a lot from France.)

Heading out of Bucharest, I hopped through Transylvania in search of Dracula.

Sadly, there wasn’t much about him to be found.

You’d think the Romanians would capitalize on the whole Dracula thing, but there’s hardly any vampire kitsch around. I was hoping for a lot of cheesy and tacky tourist traps that I could humor myself with.

But there were none.

I was so disappointed.

I would have loved a “I survived Dracula’s castle and all I got was this t-shirt” t-shirt! With True Blood, Twilight, and the “vampires are amazing” fad sweeping the world, the Romanians might try to play up their Dracula-inspired past and draw in some tourists. (Bucharest did have a Dracula restaurant, but it was closed for renovations.)

Sure, it would be totally cheesy, but it would be fun — and travel doesn’t always have to be serious. Sometimes it can just be tacky and fun. (For example, Disney World.) 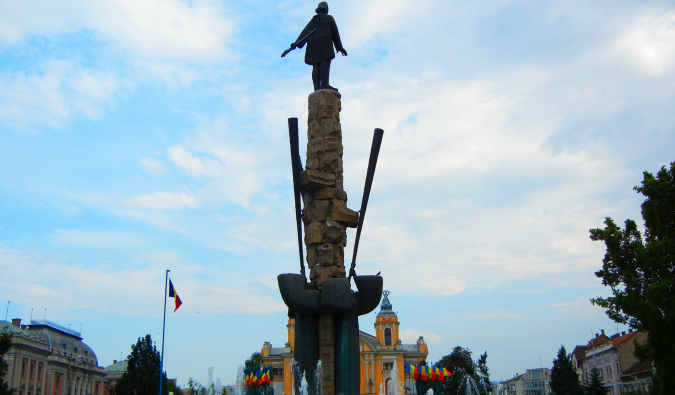 The main center of tourism in Transylvania (and what seemed to be all of Romania) was the city of Brasov. It was there that there were the most people, sites, day trips, and tours. Brasov is an ancient city that used to be on an important trading route between the East and the West.

This was my favorite spot in Romania. 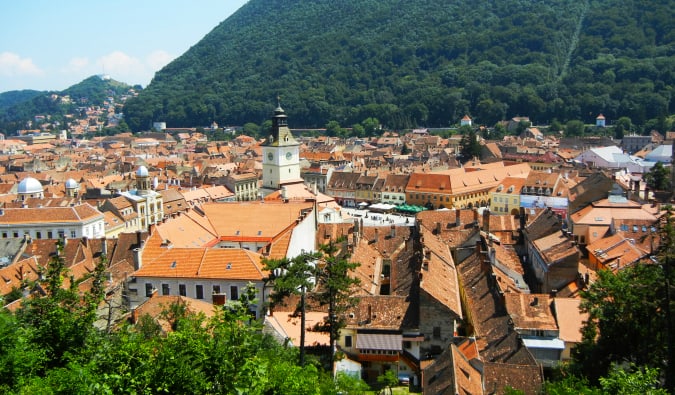 The biggest day trip from Brasov is to Bran, where people head to the “fake Dracula castle.” The castle in Bran is this beautiful medieval residence that was used over the years as a fort, then an administrative center, then a palace for the queen before the communists took over.

At best, it might have been a place Dracula stopped while fighting the Turks. I don’t know why it’s associated with him (they do have one room dedicated to his legend), but it’s a castle worth seeing regardless. It’s beautifully preserved, and there are a lot of good descriptions on the walls about its history.

Getting out of Brasov, I fell in love with Sibiu and Sighisoara, tiny medieval towns filled with cobblestone streets, medieval buildings, and little alleys to get lost in.

These were the only two places where I felt overwhelmed by tourists, and I think it has more to do with the large number of people squeezed into a tiny area than the fact that the cities are “on the map.”

Compared to other places in Romania, these towns were a lot smaller. Both reminded me of Bruges: they had a similar look, there were a number of older tourists there, and there was a lack of things to do after 10pm, which was sort of typical of the medieval towns I visited in Romania. 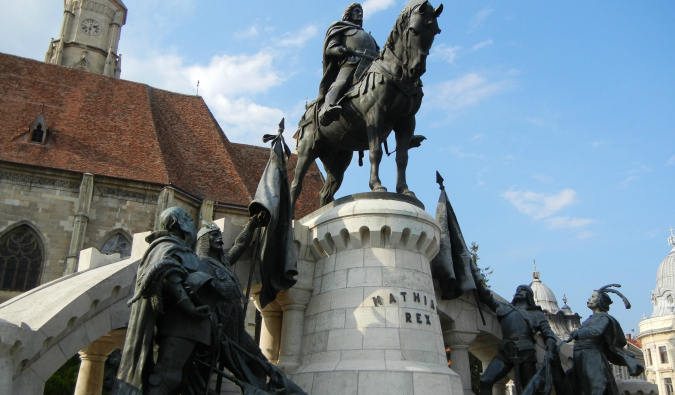 I was also surprised at how few tourists I saw in Romania.

The hostels were mostly empty, even in busy Brasov and Bucharest. Busy Bran castle seemed to have more Romanians than foreigners. I hardly saw any tour groups, and if I did, they were mostly Russian. I saw a few German youth groups on their way to go camping, but for the most part, Romania doesn’t seem to take part in the great European summer tourist season.

Though EU membership has made this country more expensive than I realized, it’s a still a great bargain. You can spend around $30-40 USD per day there if you want to travel on a budget.

As a general rule, you can expect the country to cost about half the price of Western European destinations. (I got a fancy sushi meal with drinks for $25 USD.)

And while tourism in Romania has been on the rise since my first visit, it’s still a budget-friendly destination for travelers. It’s become a popular choice for backpackers after they use up their 90 days in the Schengen Area. But you still won’t find huge crowds here!

And you basically get the country all to yourself. Romania doesn’t jump to the forefront when most people think of a “European vacation,” and I think that’s why it’s avoided the crowds.

People probably go, “Romania? What the heck’s in Romania? Let’s go to Italy.”

To me, Romania was one of the best and most beautiful countries I’ve visited in years. It defied my expectations. The food was delicious, I enjoyed the medieval towns and beautiful countryside, and most people were very friendly.

I think Romania is one of the best countries no one seems to visit. I suggest you head there on your next trip to Europe. It’ll be worth it.

Book Your Trip to Romania: Logistical Tips and Tricks

Want More Information on Romania?
Be sure to visit our robust destination guide on Romania for even more planning tips!