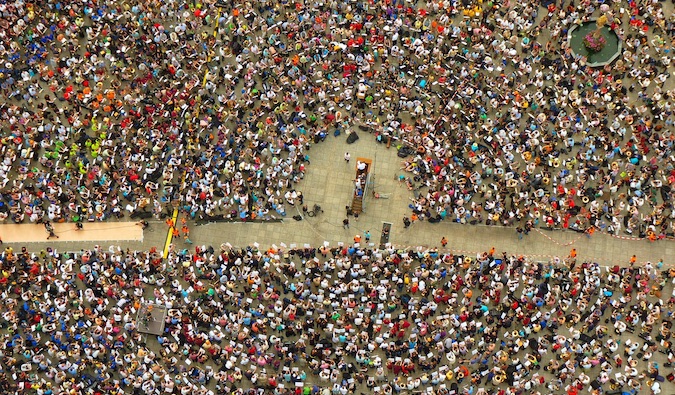 Years ago, Mississippi and North Carolina passed anti-LGBT laws and many tourists, bloggers, and celebrities promptly said, “As a sign of protest, I won’t visit because I don’t want to support a state whose laws I disagree with!”

This reminded me of when people refused to go to Myanmar because of the junta, declined to visit the United States when George Bush was president, or refused to visit Cuba because of Fidel Castro. (There are dozens of examples of people boycotting destinations because of the government’s politics that could be listed.)

While people have the right to do whatever they want and take any personal stance they want, I think tourism-based economic protests are a mistake because they hit the wrong target, they aren’t effective, and that travel and human interaction can bring about more and deeper change than a reflective boycott.

Governments can and do change: laws are passed and repealed, voters eject politicians and vote in new ones, and revolutions and sanctions topple dictators.

We might not agree with certain laws or a current government, but if traveling abroad and defending the United States during the Bush years has taught me anything, it is that people are not their governments, lumping everyone together is misguided, and you end up hurting the people who you agree with.

In fact, you might even weaken your allies by not showing support.

Like, for example, one of the bookstores I spoke at during my book tour.

This North Carolina store is suffering because authors are canceling the events this place needs in order to stay in business. Small independent bookstores are already suffering and this is just another nail in the coffin for this place. They are collateral damage to a law they do not agree with.

Governments don’t always reflect the will of all their people (or even a majority). But behind boycotts are real people and businesses who suffer. People struggling to put food on the table and meet payroll. They might not support their government or certain controversial laws yet we lump everyone together as if everyone in the destination is what we despise.

And, in doing so, those we agree with and want to support become collateral damage. We create pain for the people at the bottom, the people with the most to lose and, usually, the least say in things.

And, though the shouts of travel boycotters sometimes add to the pressure on elected officials, I’ve yet to see one country or state reverse course simply because of this reason no matter how strong the plea.

I used to say, “I’m never going to Myanmar because I hate the government” and because I wanted to take a stand.

But, when I started traveling, I found it silly that people said, “I don’t like Bush, so I refuse to go to the United States,” as if this was enough to pressure Bush to change or that we were all die-hard Bushites.

It made me realize that most citizens of Myanmar didn’t choose to live under a military dictatorship any more than I chose Bush as President.

And all my protest was doing was denying people the money they needed to survive and the global perspective that could have added fuel to their desire for change.

They Don’t Do Enough

What caused Myanmar to change, Iran to open up, or South Africa to end apartheid? It wasn’t a drop in tourist numbers. It was governmental and corporate sanctions on a massive scale.

Indiana softened its anti-LGBT law when corporations and conferences pulled out en masse. The Apartheid government in South Arica collapsed when governments, major banks, and other corporations stopped doing business with it and lending it money. Iran finally yielded under the weight of sanctions that drove it toward bankruptcy.

Those changes were a combination of domestic activism and international pressure not travel boycotts.

I think it’s foolish to think that somewhere there’s a government official watching reports of tourist boycotts and declaring, “Tourist numbers are down 10%! We must change!” If they cared about that, they would have done something different in the first place.

Governments care about big business, tax revenue, and those at the top. When you cause pain there, you cause change.

If you really want to do good, you can’t shut off people from the world — you must embrace them and show them a better way. The way we affect change is by traveling and educating people about the wider world to change their minds.

Staying home isn’t going to effect change. It simply hurts those who might not have control over their government. Travel opens people to new ideas, cultures, and ways of thinking. If you really want to bring about change, go there and kill them with kindness.

I mean don’t we travel to see the world, learn, and help foster cultural understanding? You can’t do that by staying home. You can only do that by going to the destination.

As Maya Angelou said, “Perhaps travel cannot prevent bigotry, but by demonstrating that all peoples cry, laugh, eat, worry, and die, it can introduce the idea that if we try and understand each other, we may even become friends.”

Nor do I support the current governments in Thailand or Egypt or censorship laws in China.

Do I agree with the treatment of women in many Arab countries or Japan’s policy of “forgetting” its genocide in China during WWII? No.

But I believe boycotting travel to countries because of one law or its current choice of leader is misguided. If we were to compile a list of places with one policy or leader that we don’t agree with, we would never go anywhere. There would always be a red line keeping us home.

A lot of boycotts are about signaling who we are as people and what our values are. They signal to our group I believe this and that I am with you.

However, if you really want to change the behavior of your country, lobby local businesses and your elected to make a change. Ensure your money goes to the people that most need it.

If you feel the need to “take a stand”, do so but remember people are not always their current government’s policy. I think it’s much better to engage people on the ground, change opinions, and pressure your own government or companies to take action.

We’ll create bigger change that way than if we just sit at home.