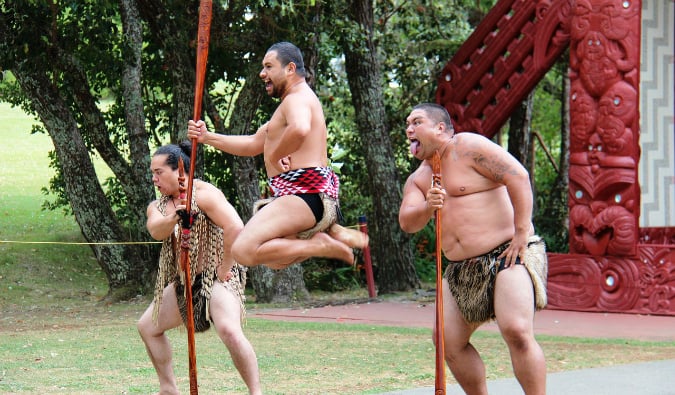 I’ve been interested in Maori culture ever since I saw the movie Whale Rider (it’s one of my favorite travel movies). I am just fascinated by their history, cool tattoos, dancing, beliefs, and generally relaxed demeanor.

As the indigenous people of New Zealand, they were greatly (negatively) impacted by the arrival of European settlers in the late 17th century, and it has only been since the 20th century that the Maori began to bounce back. They continue to protect and celebrate their culture while fighting for their rights within society today.

The History of the Maori

The Maori are a warrior race and are famous for never having been defeated by the English settlers. It’s a fact the proud Maori cherish greatly and are always happy to share.

The Maori came to New Zealand from Polynesia in the 13th century. They arrived in waves, having set out in large ocean-going canoes that ranged from 20-40 meters in length. They populated the islands over time, living off the abundant landscape.

European contact occurred in the 17th century, and contact eventually led to conflict — including internal conflicts between the Maori. Disease also took its toll. By the 1870s, influenza, measles, and smallpox killed anywhere from 10-50% of the Maori population.

By the 19th century, the Maori population had almost been cut in half. It was only with the signing of the Treaty of Waitangi, a historical document that gave some sovereignty over the land back to the Maori, that relations between colonists and the Maori began to improve.

At present, there are around 600,000 Maori in New Zealand, representing around 15% of the population. Even today, the Maori people continue to face social and economic barriers and have a lower life expectancy compared to other ethnic groups in the country.

Interesting Facts About the Maori 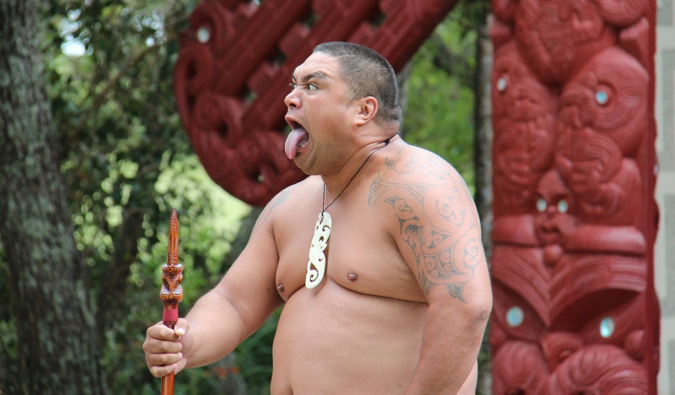 Here are a few facts about the Maori I found fascinating and inspired me to learn more about the people and their history:

Where to See Maori Cultural Show in New Zealand 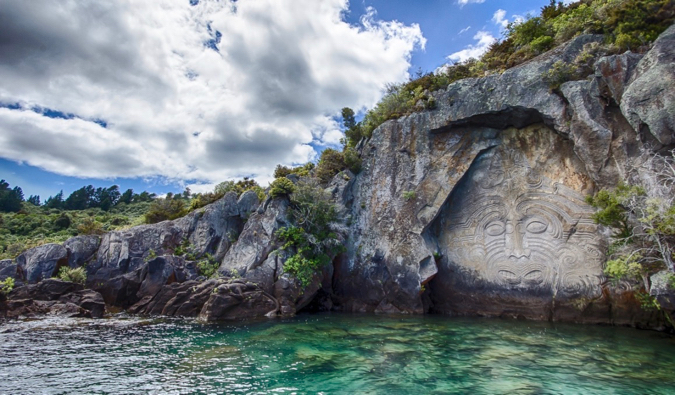 During my visit to New Zealand, I was determined to learn more about the Maori. The city of Rotorua is one of the best places to learn. There are a variety of cultural shows and educational tours in the area. A Maori in the Bay of Islands even told me that if I was going to learn about the Maori, this area would be the easiest for me to do it in.

Not only are there some amazing cultural shows here, but you can visit some traditional villages and explore the geysers that dot the landscape. It’s an important place in Maori culture and history, making it the perfect place to learn more and take in a show.

The cultural tours all are quite similar (some are smaller, some have better food, some are different length) but you learn and see a lot of the same stuff. I went with the Te Pa Tu tour (Previously Tamaki Maori Village) and I was thoroughly impressed. It’s consistently rated not only one of the best shows in the country but one of the best in the world.

Here’s a video of my experience to give you a sense of what to expect:

The show provides an introductory look at Maori life, history, and culture. It’s essentially an entertaining introduction to how they have lived and survived over the past few centuries.

Cultural shows last about four hours and include a traditional four-course meal, seasonal ceremonies, and other performances in their forest amphitheater. Tickets cost 250 NZD per person with shows several times a week (daily in then high season) at 6pm.

Another option for a cultural show in Rotorua is Mitai Maori Village. It’s the same sort of experience, and most people say it’s just as good. Tickets cost 129 NZD, with shows almost daily at 6:30 pm.

That being said, while the cultural show was interesting, the food great, and the music entertaining, it’s definitely an experience that caters to tourists.

If you really want to get a deeper sense of Maori culture you’ll want to also visit the Rotorua Museum. You can learn a bit more about the Maori here and see some important historical artifacts as well. Note: it’s currently under renovation for damages sustained during an earthquake. They still offer some tours and programs, so check what’s going on before you visit.

If you can’t attend a cultural show in Rotorua, consider seeing one in Auckland or the Bay of Islands (where you can also visit the Waitangi Treaty Grounds where an important treaty between the British and the Maori was signed).

If you can’t make it to Rotorua, The Museum of New Zealand Te Papa Tongarewa in Wellington is another great place to learn more about the history and culture of the Maori.

No visit to New Zealand would be complete without spending some time learning about the Maori, their history, and their culture. They are inextricably linked to the past, present, and future of New Zealand. The more you can learn about them, the more depth and understanding you’ll have about the country itself.

Book Your Trip to New Zealand: Logistical Tips and Tricks

Book Your Accommodation
You can book your hostel with Hostelworld as they have the biggest inventory and best deals. If you want to stay somewhere other than a hostel, use Booking.com as they consistently return the cheapest rates for guesthouses and cheap hotels. Here are my favorite hostels in New Zealand.

Want More Information on New Zealand?
Be sure to visit our robust robust destination guide on New Zealand for even more planning tips!