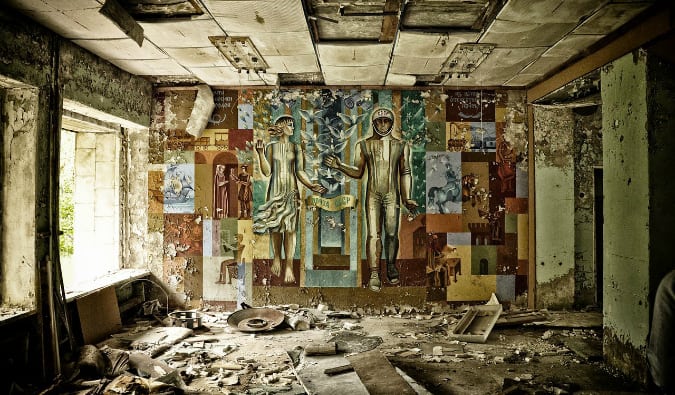 On April 25, 1986, the reactor crew at Chernobyl (in what is now Ukraine) began preparing for a safety test. Some of the systems were intentionally turned off as part of this test (the test was simulating a power blackout).

Unfortunately, those system shutdowns combined with serious design flaws as well as human error to create a series of uncontrolled reactor conditions. This led to the No. 4 reactor going critical.

By the time the operators noticed, there was nothing that could be done.

A steam explosion released fission products into the atmosphere, and about two to three seconds later a second explosion threw out fragments from the fuel channels and hot graphite into the surrounding area.

The meltdown released more radiation than the atomic bomb that destroyed Hiroshima in 1945. The immediate explosion killed two people at the facility. 134 additional people were hospitalized for radiation sickness immediately afterward (both employees and emergency response personnel).

It is estimated that all of the xenon gas, about half of the iodine and cesium, and at least 5% of the remaining radioactive material in the reactor core was released in the accident.

Most of the material was deposited close by as dust and debris, but the lighter material was carried by wind over the Ukraine, Belarus, Russia and to some extent over Scandinavia and Europe.

It was a huge disaster for the then Soviet Union and to this day is still considered the worst nuclear disaster in human history.

Over 45,000 residents were evacuated from the area, notably from the plant operators’ town of Pripyat (located 100 kilometers north of Kiev). On May 4th, all those living within a 30-kilometer radius were evacuated and later relocated.

The remnants of the No.4 reactor were covered in a massive steel and concrete building to prevent the dust and debris from spreading, though the entire plant itself was still kept running. The No. 3 reactor, for example, was still producing power until the early 2000s!

In the years following the accident, another 210,000 people were resettled into less contaminated areas, and the initial 30 km radius exclusion zone was extended to cover 4,300 square kilometers. Oddly (and crazily enough) about 1,000 people have since returned unofficially to live within the contaminated zone. 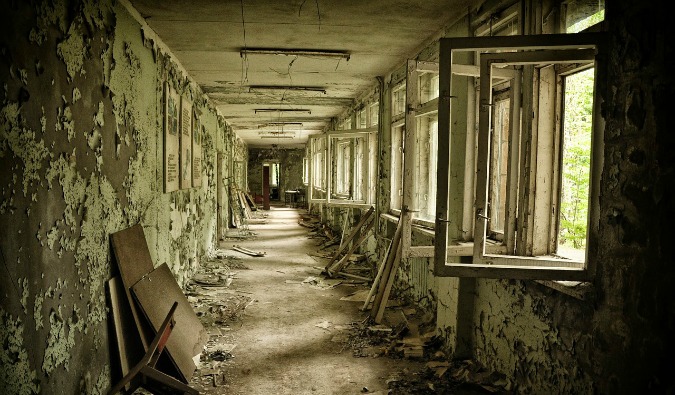 In recent years, tour groups have been offering visits to Chernobyl. While there is still some radiation contamination, the amounts are quite small and don’t post any significant short-term dangers (though I wouldn’t suggest you move there!).

The tours are incredibly interesting, though they are also rather unsettling. People packed up and fled in such a hurry that this place is almost like a snapshot of life in 1986. A creepy, abandoned, radioactive snapshot.

On your tour you’ll head to Chernobyl, passing through Dytyatky, the border into the containment area. Once at Chernobyl, you get to meet with the leadership of “Chernobylinterinform” Agency and hear all about the accident. You’ll get to feed some radioactive fish in the cooling channel and then go see reactor No. 4 covered in concrete.

After that, it’s a stop nearby the “Red Forest.” The name comes from the ginger-brown color of the pine trees after they died following the absorption of high levels of radiation. (Good times, huh?)

Finally, you visit Pripyat, the town they evacuated because of radiation poisoning. There’s nothing here but abandoned homes, cars, and a few crazy people who wanted to move back. After that, it’s back to the control point for a quick radiation check and then back to Kiev.

How to Visit and Tour Chernobyl 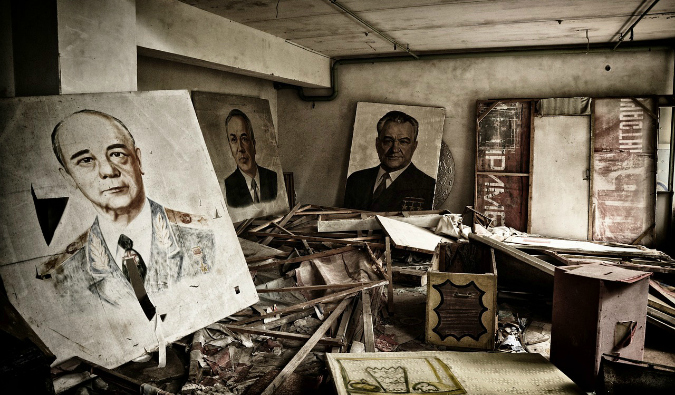 Single-day tours start at 110 USD per person, while two-day tours will cost closer to 300 USD. Tours will depart from and return to Kiev, usually leaving early in the morning and returning after supper. Chernobyl is around a 2-hour drive from Kiev.

All of the tours essentially do the same thing so the only difference between companies is quality and price. One company worth checking out is Chernobyl Visit.

Visiting independently isn’t permitted unless you’re a journalist. But by the time you hire a car, pay for gas, and jump through the bureaucratic hoops of getting a media pass it doesn’t really save you much so I wouldn’t bother. The tour guides are incredibly knowledgeable so you’ll definitely get your money’s worth if you go with a tour.

Book Your Trip to Ukraine: Logistical Tips and Tricks

Want More Information on Ukraine?
Be sure to visit our robust destination guide on Ukraine for even more planning tips!