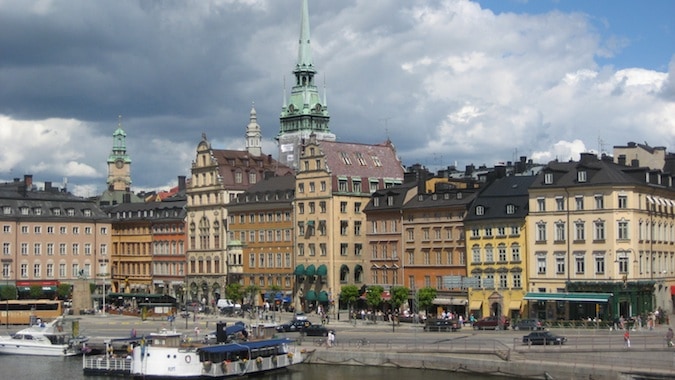 Remember how I’ve been talking about moving to Sweden since the beginning of the year? Remember when I moved to Stockholm last month? Even though it was only going to be for a few months, I was very excited to relocate to Sweden. I mean, it’s beautiful, it’s clean, the people are nice (and beautiful), the quality of life is great, and did I mention the people here are beautiful? Plus, I was looking forward to learning Swedish, having my own kitchen, and joining a gym.

Well, as you can probably guess from the title of this blog post, I’m not moving to Stockholm anymore.

I became the latest victim of Sweden’s crappy housing system. In Sweden, they don’t build apartments to meet demand, so there are always more people who want a place than places exist. This is especially true in Stockholm since most people want to live here. For Swedes, if you want to rent a place, you have to get on a list. There’s also a minimum number of points you need, which determines your place on the list. Or the type of place you can get.

I’m not really sure.

It’s all very confusing. I have no idea how Swedes “get” points. I just know that miracles are usually involved. One of my friends had her sister rent an apartment for her because her sister had “points.” One of the girls who works at my hostel just put herself and her fiancé on this list. They’ll be first in line to get the next available place 15 years from now. It’s so bad, people will put their newborns on the list so they can have an apartment by the time they become adults.

Why is it this way? No idea. Even the Swedes complain about it, and they seem to be at a loss to explain the system to me. “It’s just the way it is,” they say. The right-leaning, more market-based party doesn’t want to change the laws any time soon either. Add the fact that Stockholm doesn’t build new places to meet demand, and you have a recipe for a city with no housing. Sure, this keeps the city old and historic, but it’s a pain the ass. I don’t understand why they don’t throw up some high-rises on the outskirts of town where people might not notice so much.

This housing crunch leads to a huge secondary market, where the owner rents their place out to others at a much higher price. Sometimes the renter then turns around and rents it to someone else for even more money!

The second is that I’m only here until November, and most apartments want a longer commitment than that. (Or they only want a month, and I have no desire to be on the constant hunt for a new apartment every month.) Third, I’m not Swedish, and I think that hurts too, though I can’t prove it.

Over the last month, I’ve found a few places, but they were either too short-term or too expensive, or the owners fell through.

One of the reasons I wanted to move to Stockholm is because I want to settle down, have some roots, build a routine, go to the gym, and do all that other “normal” stuff people do. But after a month here, I find myself in stasis. I’m not moving forward, and without a firm place to live, I don’t want to put money into a gym or Swedish classes.

And with time wasting away, I decided that it’s better to just move on. It’s disappointing, but I can’t sit around forever. Some of my Swedish friends spend months looking for an apartment before they find one. I don’t have that luxury. While it would have been nice to be here, I take comfort in the fact that I tried. I didn’t take the easy road and stay in New York. I took a chance. When you break out of your comfort zone, that’s always a success — no matter what the outcome.

I have no regrets.

On September 2, I’m flying to Portugal for a few weeks before going to Spain. I have two conferences in September: one in Portugal, another in Spain. After that, I’ll head to southern France and then Copenhagen. I have a flight booked to the United States on October 10. I haven’t decided if I’ll be on it or if I’ll change the dates, but for now, I’m going to do a little traveling.

I’m looking forward to putting down some roots, but it looks like that’s just going to have to wait a bit longer. On the flip side, it looks like I’m heading home sooner than expected.

And I’m really OK with that.

Book Your Trip to Sweden: Logistical Tips and Tricks

If you’re looking for more places to stay, here are my favorite hostels in Stockholm. If you’re wondering what part of town to stay in, here’s my neighborhood breakdown of Stockholm!

Want More Information on Sweden?
Be sure to visit our robust destination guide on Sweden for even more planning tips!