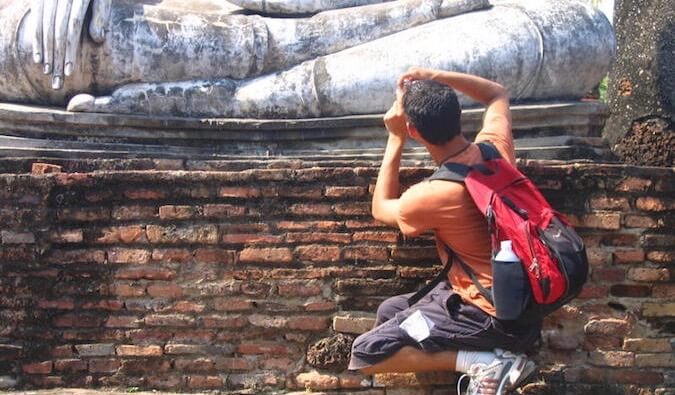 Back in 2008, I was burnt out from travel. It had been eighteen months and I’d had enough. I cut my trip to Australia and New Zealand short and flew home.

I was tired of meeting people, tired of moving around, tired of having the same conversations over and over.

It’s one of the downsides of long-term travel.

It was a hard decision.

“If you don’t like traveling, don’t do it,” Scott said. We were in Brisbane as I hit my breaking point and, since he had been traveling longer than I had, I was asking his advice. “You don’t need to prove anything. You’ve been gone close to eighteen months. Go relax back at home, and come back when you’re ready. The world will always be here.”

“I know, but I just feel like I’m giving up. I’m so close to New Zealand and the end. Am I just being impulsive?,” I asked Scott.

The next day, on impulse, I decided to listen to Scott. I booked a flight home. I didn’t check the price. I didn’t look for a way to hack it with miles. I was done. In two weeks, after eighteen months away, I’d be home.

At first, being home was fun. It was exciting to being back. I went to my favorite restaurants, visited the bars I used to frequent, did some sightseeing around Boston, and held some “Welcome Home” parties to catch up with my friends.

But, soon, the warm glow of being home had worn off. I was listless. It was winter. I had no job, no idea what to do. And life back home was the same as I had left it.

Two weeks after coming home, I wanted to be back on the road.

“What have I done,” I thought to myself.

My cousin had a temp agency and got me something covering for a woman while she was on maternity leave. It would help me pay the bills while I figured out what I wanted to do.

Not wanting to hand off important tasks to a temp, they had me answering and routing calls. It was incredibly boring and I spent every day on Facebook. I was simply there to make sure the mail got delivered. It was a mindless job.

And it gave me a lot of time to think.

And there was no one I knew who could relate to what I was feeling.

No one to go “I’ve been there too.” No one had taken a long term trip. They just all wondered why I wasn’t thrilled to be back.

I had changed, but the world around me hadn’t. I felt like a square trying to be smashed into a round peg. I had shed my old self and here I was being stuffed back into it.

Being stuck in a cubicle again made me realized I wanted to get out of the cubicle. I wanted a way to get back on the road.

“Maybe I should become a travel writer“, I thought. “I bet writing guidebooks would be pretty cool and that would get me out of the house!”

Traveling the world in search of stories, sharing my expert advice as I explored the lesser-known regions of the globe. It sounded perfect.

But how would I get started? How does someone become a travel writer?

I had no established writing résumé or any experience. But being the Gen Y-er that I am, I thought, the Internet can solve this problem! I’ll just create a website, write for some other websites, and then I can submit to Lonely Planet when I have some experience.

So I started my website as a form of escape. I would build it up while I saved up and then head out on the road again.

But, before I could begin, I needed a name.

Polling my friends, they said to go with nomadicmatt, as the other one sounded too sexual. They made a good choice. (Back then, I didn’t give any thought to a brand name.)

In the beginning, it was a simple site. I had some friends teach me basic HTML, and my site looked like this: 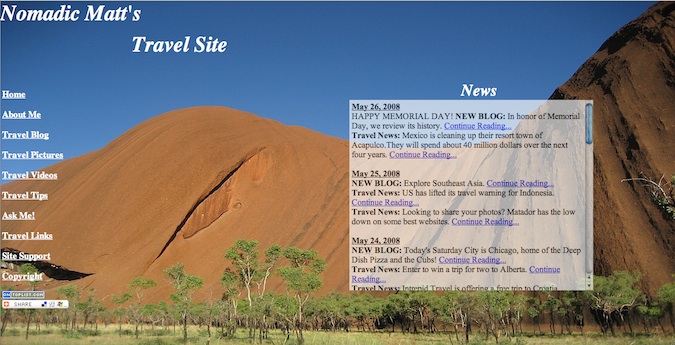 It’s like a bad Windows desktop. And it was a real pain to hand-code everything, but it did help me learn HTML, a skill that has come in very handy over the years.

All of my original posts were short, poorly written, and all over the place. I had no clue what I was doing. (I’ve actually gone back and edited them a bit to make them better and more detailed.)

I guess it’s easy to look back and think, What the hell was I thinking?! But when you’re just starting off, you think everything you write is genius. You’re simply finding your way. What works? What doesn’t? What’s your voice? What’s your message?

It was a long, slow, and tedious process.

But I stuck with it.

Over the next few months, I wrote for Matador, Vagabondish, and the now defunct Hotel Club and guest-posted on a few other sites. I was building traffic and getting new readers. I was figuring it all out. Soon, I thought, I would be writing guidebooks. My name would be in Lonely Planet, and all would be right with the universe.

Except that never happened.

I logged long, long, long hours in front of my computer (I think I still do) trying to gain exposure and readers. I kept at it, but I often felt I wasn’t getting anywhere.

I booked a one-way flight to Europe, called up my boss in Bangkok to see if I could teach again, and prepared to leave in August.

Then, one day in the middle of the summer, someone offered me $100 USD to put a text link ad up.

I needed the money and selling links was a common practice at the time.

Then a few months later, I got more offers. Then more offers. By the end of 2008, I was making a steady $1,000 per month from my site via text links and ads on my website.

Maybe I could make a living in the travel industry after all.

I started getting more exposure in traditional media and online circles. I had a few big guest posts. Slowly but surely, my search traffic was going up. I was getting more readers. It was as though the snowball I was trying to push down the hill suddenly sped up and began going on its own.

The stars were aligning and things were happening…but they weren’t aligning for me to become a guidebook writer.

I harbored dreams of guidebooks for a long time, though, even after the success of my first e-book. I still thought I could make it happen.

But, when I went to my first travel conference in 2010 and everyone called me “Nomadic Matt,” I realized that that was who I was and what I was meant to do.

I started out on one journey but ended up somewhere completely different. I couldn’t be happier.

Two roads diverged in a wood, and I—
I took the one less traveled by,
And that has made all the difference.