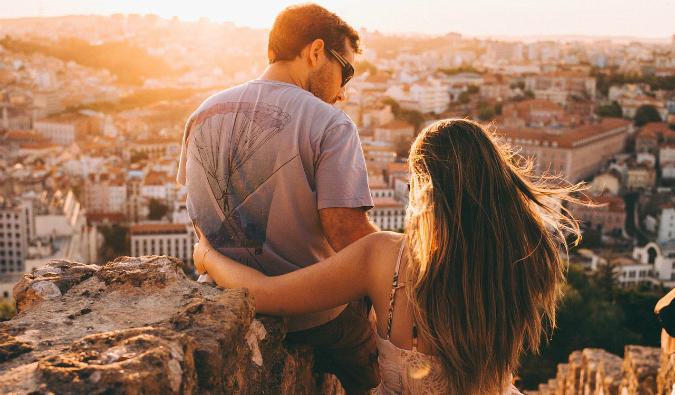 This is a guest post by Ant, one half of Positive World Travel.

Elise and I fight. A lot.

It’s usually about petty things that don’t really matter, but in the heat of the moment, sometimes even the smallest issues get blown out of proportion.

It’s the stupid stuff, like where we should go next or what we should see. We argue about food a lot, too. Elise is always hungry and needs to eat throughout the day, whereas I can last all day on one big meal.

And our filming often causes disagreements; we don’t always share the same “vision.”

Spending 24 hours a day, seven days a week with someone is bound to take its toll at some point or another. It’s normal. In all honesty, I would be more worried about our relationship if we didn’t fight after spending this much time together.

Our fights typically occur on travel days, when one of us is either tired, hungry (mostly Elise!), or fed up with the day. Traveling 18–24 hours on buses, trains, or planes hardly brings the best out in anyone. The snapping begins over something trivial (like what taxi to catch), and before you know it we’re fighting about how Elise never listens or how I never understand her feelings.

One classic fight that should have earned us a spot on Jerry Springer happened when we were traveling from Kathmandu to Chitwan in Nepal. Chitwan is only 150km away from Nepal’s capital, but the road conditions are really poor, so we were on a cramped minibus for about eight hours.

As soon as we got off the bus, Elise started complaining about how she had a sore neck and just needed a sleep and a shower. I, on the other hand, was feeling pretty good. The motion sickness tablets I had taken knocked me out during the trip, and I had managed to grab some sleep on the bus.

That’s when the bickering started.

We snapped at each other about the best way to reach our guesthouse, what guesthouse we were going to stay at, and how long we would be staying there. We bickered the whole time until we found a place to stay. As soon as we were in our room, things got worse. The fighting eventually escalated until I went for a walk and Elise had a nap.

When I came back from my walk, the fight started again. This time it was about how I never put my toothbrush or contact lens solution in the right spot and how Elise can never remember where she keeps things in her backpack.

The fight continued for another several minutes, and we began to pick on issues totally unrelated to the original topic. When does a fight ever stay on topic anyway? You always end up fighting about irrelevant issues. You say things you’ll regret later and don’t even really mean in the first place.

With tears in Elise’s eyes and I so exhausted by the whole argument, we had to make a choice: either continue fighting or come to our senses.

I told Elise we both needed to calm down and look at what we were fighting about. What was the root of the argument? Nothing but a bumpy bus ride.

I think Elise was just as relieved as I was to end the fight, and we ended up talking about ways we can resolve these conflicts and stop them from happening in the future.

How to Resolve Conflicts

The thing with fighting on the road is that the arguments take on a different form than the fights you have at home. At home, there are distractions like friends and work to keep your mind off the argument.

When traveling, however, there’s no escape. You have to talk about how you feel or what’s bothering you and come to a resolution.

What works really well for us is having a “word.” One word that you can both use if you think the other person is picking a fight for the sake of it. You both have to like this agreement. You can’t abuse the word and say it whenever you want just to shut your partner up. It has to work for both of you.

This approach has really saved us and prevented a lot of fights from starting. For instance, if Elise is complaining about how long we’ve been walking or how hungry she is, it tends to get on my nerves. I’ll make comments back to her that can be a little heated, and Elise will simply use the word. It snaps me straight back into line.

Even though it may sound silly to act so quickly on one little word, it really does help us to prevent situations from spiraling out of control. I realize that what I’m saying is unnecessary. Problem solved. Fight avoided. Happy days.

Honesty is another important part of a relationship that can help resolve conflicts. Not being afraid to express how you feel is so important during an argument. You have to be able to listen to each other’s point of view and take both criticism and advice to heart.

Arguments are no different than a disease, and prevention is always better than a cure.

After 16 months on the road, we, as a couple, have pretty much figured out how to avoid the bigger arguments. We still bicker a lot, but it’s never anything as serious as the fight in Nepal. We are now conscious of what can set each other off and always try to minimize those actions before they escalate out of control.

Traveling lets us work together in stressful situations and solve problems, but it also allows us to learn how to prevent arguments. The latter is the most challenging thing about traveling as a couple by far, but I think we are slowly mastering it.

Anthony is one half of the dynamic duo from Positive World Travel.