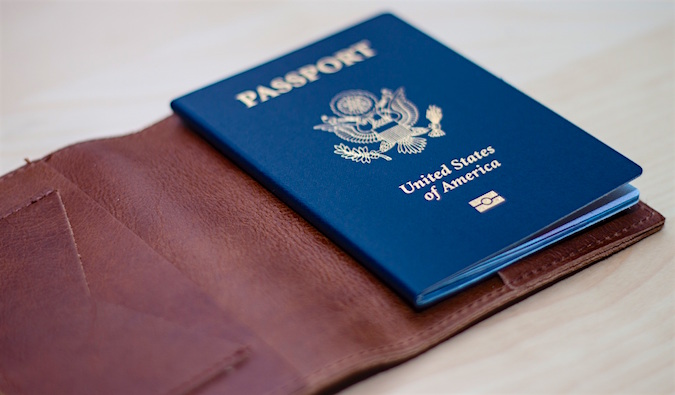 The current percentage of Americans that own a passport is now around 21%, up from 15% years ago. Unfortunately, this common statistic is hard to back up as the state department doesn’t really keep records. Yet the number of Americans who traveled overseas has decreased overall since 2006.

So why did we all go get passports? Because we are now required to have passports for travel to Canada, Mexico, and the Caribbean. In fact, Mexico travel is up while European travel is down. Americans didn’t find a new sense of adventure. They are still not traveling. And the reasons remain the same.

Are Geography and Cost Really Relevant?
Many people countered my argument by saying that geography and cost were big factors but if cost and geography played a role in determining where you traveled, no one would ever travel. Yet New Zealand is the middle of nowhere and how many more Kiwis do you meet traveling than Americans? How many more Aussies? Poverty is poverty. No matter where you are in the world, if you don’t have money, you don’t travel. But is it that much more expensive to fly from America? Nope! A flight from LAX to BKK is $787 dollars. A flight from London to BKK is $654. A flight from Sydney to BKK is $794. Americans bear no extra cost burden relative to the rest of the world.

And the geography argument? Well, I’ll get to that one in a second.

Fear, Awareness, and Priorities
The reasons why Americans don’t travel overseas can be mostly explained by one thing: cultural ignorance. Many people in the previous post assumed I meant Americans were stupid. I wasn’t implying that. Americans are ignorant in that they don’t know about the world. We all have seen the Jay walking clips and the skits on TV where Americans can’t name foreign leaders or countries. Moreover, as education budgets continue to get slashed, humanity courses are usually the first to go meaning people learn very little world history. In some states, the whole world has to be explained in one year. Additionally, surveys show that news agencies devoted only 10.3% to foreign coverage in 2008 (source) while oddly, 13% went to some polygamy case in Texas. Americans are simply not told about the world or clamoring to know about it.

And why should they be? Politicians and media paint the world as a scary place, filled with crime, hate, terrorists. Bill O’Reilly, a man who clearly has never been to Amsterdam, has called that city a cesspool. (Twice!) My mother constantly tells me when I go anywhere in the world to “be careful” as if the world is a big scary place. Many of my old co-workers do the same. We are constantly told that there is great anti-Americanism in the world- wherever you go, people will dislike you. (A fallacy that is rarely disproven in media). Moreover, America’s hegemony since WW2 has ensured that we have been the dominant force in the world. Despite the rise of China, Brazil, and India, our politicians tell us everything in America is the best (yet #38 in health care). Countries will always do what we want. America is the leader. We are the city upon a hill. And when you are the best, why go to “godforsaken” countries where they hate you for being American and might rob you?

And this is why geography does play a role in why Americans don’t travel. It’s not that America’s size makes travel prohibitive, its size is important because people feel there is no reason to leave. We don’t need to travel to “big scary places” when we have deserts, tropical islands, mountains, endless summer, wilderness, snow, and more. Every landscape can be found within America’s large borders. You can have everything you want here. A friend from Iowa once joined me in Thailand. When she told her co-workers about it, their response was “Thailand? Where is that? Why would you go there? If you want a beach, go to Florida.”

Lastly, travel is often viewed as a sign of weakness. Americans typically get about two weeks of travel per year. Overseas, the average is about 4-5 weeks, not including sick leave. So time is a major factor. It makes more sense to fly to Australia for 3 weeks than it does for 1. But there is more to it than that. Travel is not a priority here. In the trade off between time and money, Americans choose work and money. While I was home, there was a story on TV about how there is a growing trend to take only ONE week of vacation. Two consecutive weeks is considered too many. It’s a sign that your work isn’t important, you aren’t a team player, or you are lazy. Workers are made to feel guilty about leaving. And, in this tough job market, no one wants to seem less than 110% committed.

Why the majority of Americans don’t travel abroad is a complex issue that is more cultural than anything else. Geography and cost are minor issues when compared with the importance we give work and isolation. As I said last year, and have expanded upon here, Americans don’t travel because we are simply uninformed about the world and told that we don’t need to be- it’s scary out there, go to Florida with your one week instead.

Change?
Last year, I had said I had seen signs of hope that this will change. Younger people are more engaged and more interested in the world. The internet has made people more at ease meeting people around the world. But the cultural forces pushing against them are strong. A weak economy, a weak dollar, and a weakening US have seemed to make America more isolationist. I don’t know the future. But I do know that right now, Americans still aren’t traveling overseas. And, sadly, that won’t change any time soon.