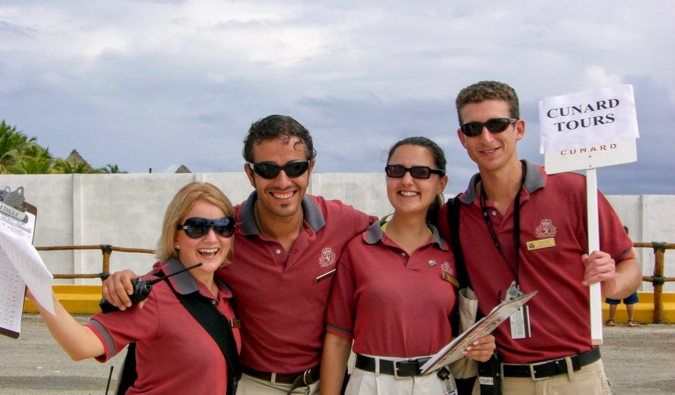 Before I went on my cruise, a lot of people said they wouldn’t cruise because of their poor labor practices. Cruises exploit workers, they said. I’ve heard about the long hours and low pay that most cruise workers endure, but rather than assume, I turned to my friend Wandering Earl, who for a number of years working on cruise ships as a tour director. Earl and I spoke about what it’s really like to be a member of the “crew” on a cruise ship.

Nomadic Matt: How did you end up working on a cruise ship?
Wandering Earl: Back in 2000, I met a fellow traveler who told me about his experiences working onboard cruise ships. I was intrigued by his stories of waking up one morning in Jamaica, the next morning in Barbados, and the next in Costa Rica. I also liked the idea of more travel and vacation time.

He spoke of working with hundreds of crew members from around the world, of crew parties, of free activities in every port, and of a working/living/social environment that seemed like something I wanted to experience.

After I finished teaching in Thailand, I contacted him and he put me directly in touch with a vice president he knew at Carnival Cruise Lines.

Tell us about your job(s) over the years. What do you do exactly?
I began as an assistant tour manager, but during my first contract, I was promoted to tour manager, a position I held for the remaining 4.5 years I worked on ships. As a tour manager, I was in charge of the tour office, which is the department that organizes land excursions for passengers in all the ports of call.

For me, my schedule involved being the first person off the ship in the morning, dispatching the tours for a few hours, enjoying some free time in port, then returning to the office in the evening, where I would continue organizing the excursions for the following ports and complete the necessary daily reports to be sent to the head office.

On days when the ship wasn’t in port, I would be in my office still communicating with the tour operators, organizing the tours for future voyages, and dealing with any number of unexpected situations that would arise.

During sea days, I would also give presentations in the main theater, where I would talk about the ports the ship was scheduled to visit and which excursions we offered. [Editor’s note: I don’t remember any of these on my cruise!]

A lot of people criticize cruise liners for their poor working conditions. Have you ever felt mistreated?
Not at all. While crew members do work long hours, the staff are treated quite well. Most ships these days offer very high-quality crew accommodation, along with several dining halls, crew bars, crew shops, Internet cafés, coffee bars, crew gyms, and party areas, all specifically for the crew.

There are language courses you can take, and even business courses and other certifications available to all crew members. There are frequent movie nights, theme parties (cruise lines organize parties for the major holidays of every nationality working onboard the ship), and plenty of other crew activities.

Out of the thousands of crew members I’ve interacted with, I’ve never heard of any major incident of a crew member being mistreated.

Have working conditions improved over the years?
Absolutely. There is simply no way in this day and age that cruise lines would be able to survive if the working conditions were poor. And with every new ship that is built, the crew areas are always improved in order to ensure that the quality of life is as high as possible, something that is important when you are working in such an enclosed environment.

There are always very specific rules in place as to how many hours every crew member can work, how much free time they must receive each week, and what their specific duties entail.

And the safety of every crew member really is a priority, at least with the three cruise lines I worked for. In my experience, the officers in command of every ship do whatever it takes to ensure that the crew members are as happy as possible. 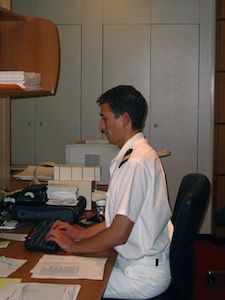 Most of the “lower” jobs receive very little money from the cruise lines (maybe $200–500 USD per month), with gratuities making up the rest of their salary. It would be a lot harder to convince people from the Western world to take a job for such a small base pay, but for those from developing countries, this amount is often much more than they would earn back at home.

As for keeping crew members in control, every cruise ship I’ve worked on had a Crew Office that was serious about listening to crew member issues and complaints, regardless of the position they held. And crew members were encouraged to speak out about anything they felt needed to be changed, whether it pertained to work safety, improved crew facilities, salaries, or anything else.

As a result, changes were made on a regular basis, and crew members who suggested major changes that were indeed implemented were often rewarded for voicing their concerns in the first place.

But both of these are untrue.

Working on a cruise ship involves long hours for sure, but every crew member does have free time, and there are always crew activities organized to ensure that ship life involves much more than just work. Likewise, while there are crew parties organized every week or two, working on a cruise ship does involve real responsibilities, and anyone who doesn’t take their job seriously will find themselves out of a job before long.

Another misconception is that the pay onboard cruise ships is quite low. And while some positions earn a low base salary, when combined with tips, usually these crew members are earning much more than they would earn in their home countries.

Also, for other positions, such as those in the front office, tour office, or entertainment department, the salaries can be quite generous. And when you consider that crew members have very few expenses during their contracts (room and board, health insurance, flights to/from the ship, etc., are all taken care of), it is possible to save much more money during one contract than most people would save in a year or more working a job back on land.

Really? A guy in Haiti was telling me that after working eight months on a ship, his brother would bring home $5,000 USD. While that might be a lot for Haiti, it still seems like subhuman, sweatshop labor pay. How much did you make?
To bring home over $600 per month (which is more than the average salary in dozens upon dozens of countries) while having all of your expenses paid for is quite a good setup, and any crew member is always free to leave if they feel the pay isn’t worth it. That guy from Haiti can work for 5–10 years on a cruise ship, go home and live quite well, and in many cases, retire. I can’t tell you how many times fellow crew members from developing countries would show me photos of the brand new three-bedroom house, complete with a swimming pool and ocean views, that they just bought back home from their cruise ship salaries.

What’s one of your “day from hell” stories?
This would be a tough call. Maybe it was the day our ship arrived in Panama, and I found out that our tour operator had to cancel the “Panama Canal Tour” (which was the highlight of the cruise), a tour that 800 passengers had booked.

After explaining the situation to those 800 people from the stage of the ship’s theater, I then spent one hour being screamed at, being called nasty names, having fruit thrown at me, having one man spit on me, being threatened, and having one guy jump over some seats to try and attack me. And the abuse continued for the rest of the cruise.

The best day on the job was _____________.
The day I disembarked the ship in order to escort a multi-day overland tour to Jordan and Egypt.

During our 2.5-month world cruise on one particular ship, our department offered several of these extended excursions to our passengers, and each tour was to be escorted by a member of our team.

So, I enjoyed a five-star, eight-day trip through Egypt and Jordan, visiting Amman, Petra, Wadi Rum, Sharm el-Sheikh, the Sinai Desert, Cairo, and Luxor, all without having to spend a single dollar. It was definitely one of the best perks of my job. 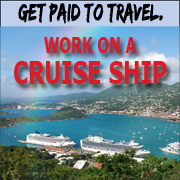 For more about Earl, life on cruise ships, and how you can work on cruise ships, check out Earl’s phenomenal and detailed definitive book on getting a job on a cruise ship. It’s an excellent resource for anyone looking to get into the cruise industry, and it’s updated every year. Earl is the best expert I know on the subject!