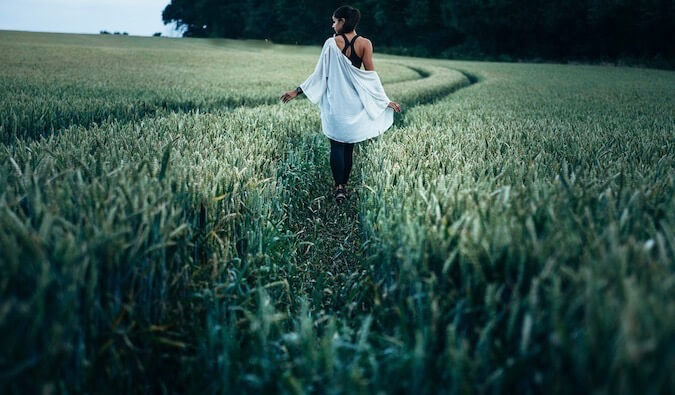 This is a guest post by Laura, our former resident expert on female travel.

Contrary to what you may have heard, solo travel doesn’t have to be scary; in fact, you might end up loving it.

Now, that doesn’t mean solo travel is always easy. It tests my courage, as well as my patience and willingness to adapt to situations outside of my comfort zone.

But despite the challenges, because of solo travel, I’ve met people and had adventures I don’t think would have had otherwise. Traveling alone has taught me many things and opened up many great doors. Some of my favorite memories are below:

“Come Stay with Me”

While laying by a pool in Aqaba, Jordan, I was approached by two women who were teaching in Amman. One of them had seen me running that morning and informed me that she was also running in the Dead Sea races. She graciously invited me to stay with her in Amman.

Although we had less than a five-minute conversation, I contacted her on my way to Amman and ended up staying five nights with her. I could have been cynical and suspicious but instead decided to take this stranger up on her offer and go with my intuition. Because of that, I had a great time making new friends and getting to know both the local and expat community.

Had I been in a group of three or four, this offer might not have come my way.

A hotel worker in Dana, Jordan, had a friend going to Amman who offered to drop me off in Madaba on the way. It was a bit out of his way, and I wasn’t sure about getting a ride from a random guy.

But I also knew how seriously Jordanians in the hospitality industry value reputation.

My hotel worker wouldn’t send me with someone he didn’t trust. His friend had a small pickup truck, so there was only room for one passenger. I took him up on the ride, and he even called later in the day to make sure I had found my way around in Madaba. It turned out the friend was a geologist, and during the ride, he gave me a science lesson about the surrounding environment and showed me his lab when we stopped to drop off samples.

After making it to Namibia, I went skydiving for my birthday in Swakopmund.

It was here that I met three people from Ireland who were intrigued that I was a female traveling alone. They were doing consultant work for the government back in the capital city, Windhoek, and invited me to come to dinner with them when I got back there. They wanted to know all about my trip. I took them up on the dinner, and since they’re Irish, they also insisted I have multiple drinks!

I had a lot of fun making new friends simply because I was alone.

The Kindness of Strangers

In many places I traveled, it wasn’t common to see a woman traveling alone. As a result, I often had people looking out for me, whether it was catching the right bus or finding my guesthouse.

On a bus to Monkey Bay in Malawi, my seat buddy was getting off before me. He gave me his cell number and asked that I please text him when I got there safely so he wouldn’t worry. And no, he wasn’t some creepy guy; he was in his forties, had kids, and was genuinely looking out for me.

In Malaysia, I met an older gentleman on a bus who offered to take me sightseeing around Penang, because he and his wife love to show people around.

And in Italy, I had so many people graciously give me directions when I had that lost, glazed-over look on my face.

These are all opportunities that occurred because I was alone and not with a group.


***
While people have been more than willing to help me out even when I have a travel partner, I like knowing that as a solo female traveler, I’m bound to have interesting and unexpected adventures and meet some really great people — as a result of being alone.

And it’s because of this that I’ll probably travel alone again and why I think that everyone should travel solo at some point, if only for a little while.