I’m a man of routine. Whenever I fly, I put my boarding pass in my passport, and then put both of those in the magazine pocket in front of my seat. I flip through the bad in-flight magazine. I put it back. I tune out to my music. Grab my passport and exit the plane.

Except this time, I missed a step.

Stepping out of the restricted area at the airport, I suddenly had an awful realization.

I had left my passport on the plane.

Rushing to the airline’s office, they said they would call the plane to get it. It hadn’t been more than 15 minutes, so I figured there was a good chance it was still going to be there.

Except it wasn’t. They couldn’t find it. Maybe someone had turned it into the security office. The cleaning crews usually hand things in there. I figured given how quickly they clean and turn around planes on low-cost airlines that seemed the most likely. Off I went.

Except the security office didn’t have it. And when I returned to the airline’s main office, they still didn’t have it, and now the plane was already on its way back to Copenhagen.

Defeated, I made my way into Amsterdam. I called the security office and the airline again, but my passport was nowhere to be found.

And along with it, nine years of stamps. I had added pages to the passport twice as I accumulated those stamps. Now they are gone…and I was devastated.

What to Do When You Lose Your Passport 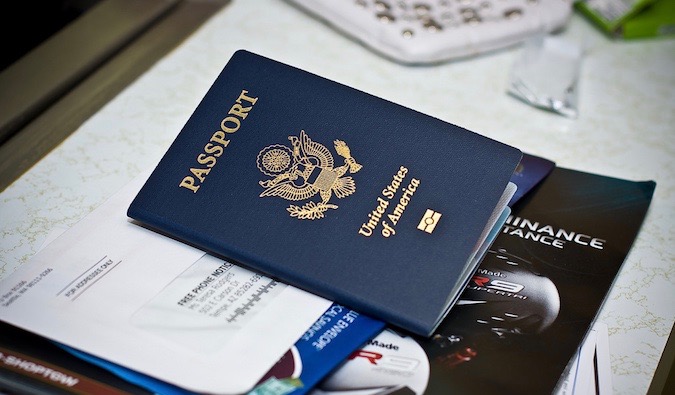 Losing your passport is really just a big inconvenience. It’s actually really easy to get a new one.

However, the new one the US Embassy issues while you are overseas is an emergency temporary passport. These passports have limited validity of either three or six months. They are basically only good long enough to get you home and aren’t meant to travel around on long-term.

To get a new passport, you need to do the following.

After filing the paperwork and paying the fee, later that afternoon you will have a nice new emergency passport. Since most countries want passports to be valid for six months after entry, these passports aren’t good to travel on.

However, in Europe, that rule is waived, so you can travel around a bit before you need to get a real, 10-year passport.

Unfortunately, those take time, especially when you aren’t in the US. Outside the United States, they take 10 to 14 days.

Inside the US, you can usually get a brand new 10-year validity passport the same day you apply for one if your travel is urgent enough. But you know the government — sometimes things are slow.

And that is what really screwed me.

The trip didn’t give me a lot of time to get a new 10-year passport. Any delay and I’d miss my flight — and my birthday plans for Greece would be delayed and ruined.

But that wasn’t the real problem. If I was just flying back into the European Union, I could probably have gotten by on my emergency passport as long as I showed them proper travel plans and proof that I had enough time to get a new passport. They are pretty easy to please in Europe.

But I was flying through England. And as the guy at the US embassy said, “those guys are total hardasses” (I wonder if that is the official government stance?).

Having flown through London enough and having almost been denied entry for not having a printed version of my outbound flight, I know they are indeed total “hardasses.”

Everyone, including the embassy, recommended that I avoid trying to re-enter the UK on a temporary passport. Going out would be easy. Coming back, I might face problems.

And with no real idea (everyone has a different story!) about how long getting a new 10-year passport could take while in NYC, I couldn’t risk it. The passport office in New York City requires appointments and make no guarantee of a same-day turnaround.

So I missed my weekend in New York City. I missed my friend’s wedding. (She was not happy.) I missed a lot of things.

All because I spaced out and left my passport on the plane.

But on the bright side, at least I now know the process for replacing your passport overseas.