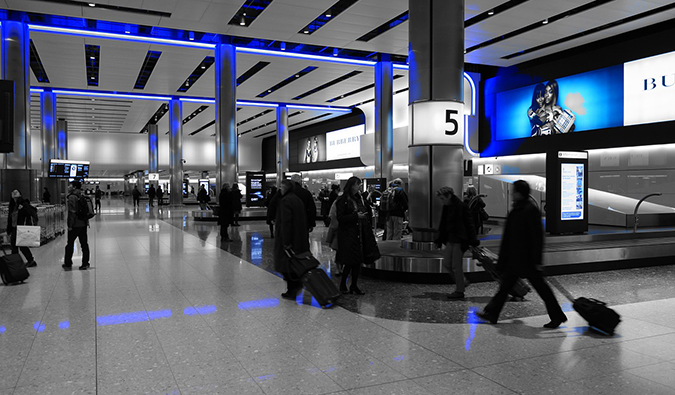 Bonjour from Paris! Today I start my next European group tour. For two weeks, I’ll be taking 12 readers to some of my favorite bars, restaurants, and locations around Europe.

We start in Paris, a city I can’t get enough of. My countless visits here never get boring. Walking down its cobblestone streets, gazing at the Eiffel Tower, lounging in one of its parks, and smelling fresh bread and cheese at the markets fills me with joy. It’s like falling in love all over again.

My most recent journey to Paris was supposed to be easy. After my annual trip to Vegas with friends, I was to board a flight, land in Paris, and be relaxing on the Seine before you could say Les Misérables.

But it wasn’t meant to be.

After checking in with the world’s nicest agent, I proceeded to my gate. Sitting down, I noticed our flight time had changed from 10:40 a.m. to 12:40 p.m. That would put us in NYC 17 minutes before my flight to Paris. However, as 11 people on my flight were connecting to Paris and JFK was on a total ground stop, there was a chance my Paris flight would be delayed and all would be right with the world.

I went off to get lunch and do some work.

But when 12:40 rolled around and we hadn’t boarded, I got nervous. Suddenly, we weren’t scheduled to leave until 2 p.m. Now, I would definitely miss my flight to Paris. The gate agent couldn’t tell me anything, so, frustrated, I called up American Airlines reservations.

Yes, they knew about the situation and had already rerouted me.

Their solution? A 10:55 p.m. flight to London, a six-hour layover in Heathrow, and then a final flight to Paris, landing at 4 p.m. local time.

I was silent as my mind slowly ran through what such a long day of travel would be like. I’d get to Paris the same day, but as a zombie from such little sleep. I imagined myself shuffling my feet on the way to my hostel, chanting “sleep” instead of “brains.”

No, that was not appealing to me.

I asked if I could just come back for a flight the next day and keep my original itinerary. “No problem,” they said. I’d land in Paris Friday morning, but after a better night’s rest and without a long layover.

Hanging up, I informed the gate agent of my plans. She called down to see if they could offload my bag but couldn’t, so it would wait for me at JFK like a waiting lover before we ventured to Paris together.

Yes, this was a huge inconvenience, but it was better than all those connecting flights. If travel teaches us anything, it’s to roll with the punches.

The next day, I got on the plane in Vegas, arrived in a zombie-like state to JFK and proceeded to find out where my bag was. Having lost bags before, I never assume my bag will get where the airline says it will go.

The agent checked her system and said, “Yes, your bag was scanned into JFK last night.”

Phew, it had made it.

“It’s all tagged for tonight’s flight, right?” I said.

Silence. And then disaster.

“Hmm, well that is odd. They don’t see it downstairs, but they will check another holding area.”

“Nope, it’s not there either. We don’t know where it could be.”

Now I’m confused. If my bag made it to JFK, where would it go? Bags aren’t supposed to fly internationally without a passenger, and the bag was noted to go on my flight with me.

The agent investigated more but with no luck. I began to stress and panic. Don’t tell me I lost another bag! Buying new clothes in Paris is going to be expensive. What the hell, American Airlines?!

After some more investigating, it turned out my bag had been tagged for an earlier Paris flight, but it was never scanned showing it left JFK, nor that it had already arrived in Paris.

“The bag should have been scanned,” I was told.

But it wasn’t, and no one was sure where it was.

It wasn’t in the hold for my flight, it wasn’t downstairs, and it hadn’t scanned out on the previous flight. Their best guess? It went unscanned to Paris, and I’d just have to wait and see if it was there.

We’re all slaves to our past experiences. I’ve lost bags or had them arrive late before, and I was nervous that this was going to happen again. When an airline says it can’t find your bag, it normally doesn’t end well.

Stressed and tired, I got on my plane and hoped for the best. I barely slept as nightmare scenarios played through my head. After we landed, I nervously proceeded to baggage claim.

And when I got there, I saw it. My beautiful grey backpack was sitting there, waiting for me.

Despite a baggage handler’s failure to simply scan the bag into the system, it made it to Paris. I slung my bag over my shoulders and headed toward immigration.

My anxiousness melted away and all was right with the world.

Travel is about rolling with the punches, and it’s situations like this that remind you no good will come from stressing over mishaps. Delayed flights happen. Itineraries change. Bags get misplaced.

Whatever happens, will happen.

Situations like this simply remind you to go with the flow and relax.

…and to find myself a smaller carry-on backpack when I get home.

Want More Information on Paris?
Be sure to visit our robust destination guide to Paris for even more planning tips!