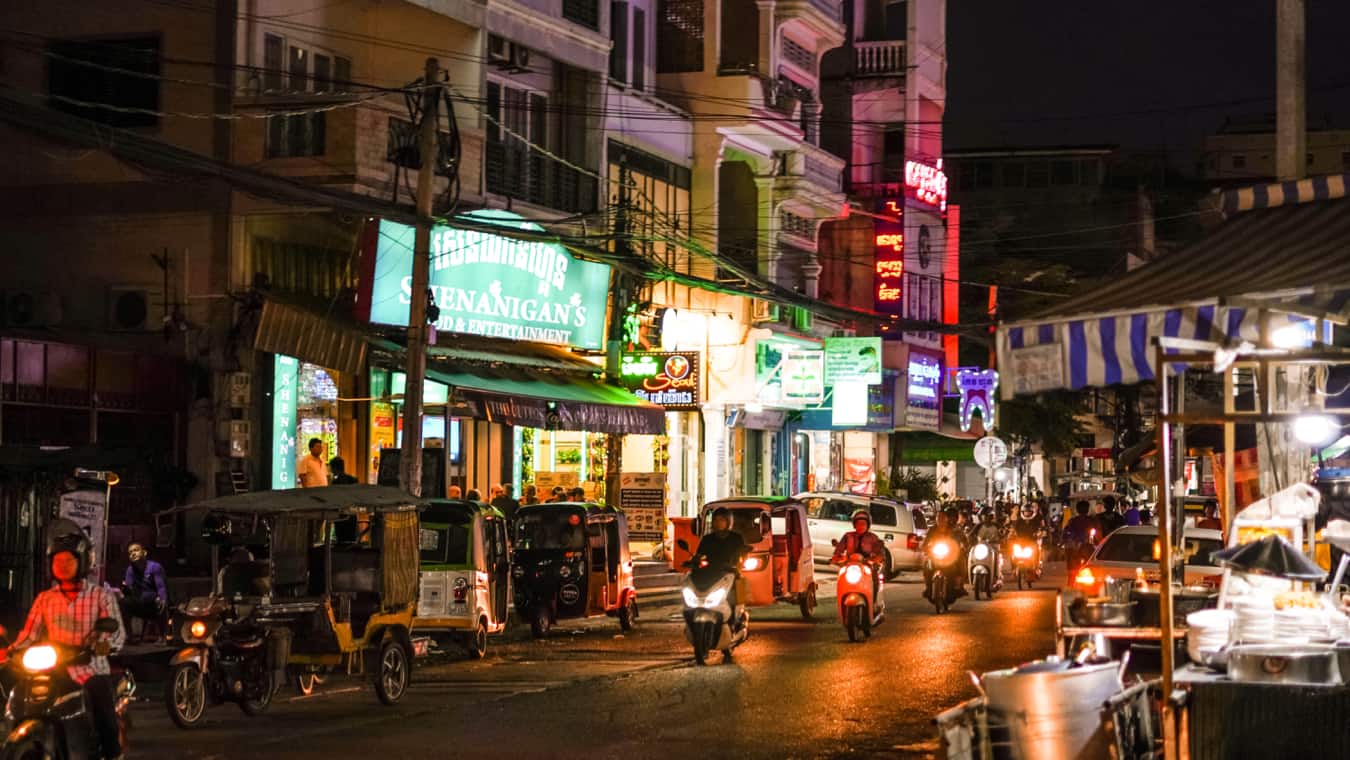 Note: This story was updated in June 2019 to fix some links and resources.

The first time I visit Phnom Penh I was only meant to stay three days. In was 2007 and I had less than a month in Cambodia before I planned moved to Thailand. I wanted to explore as much as possible and try to get off the tourist trail a bit. But three days became four, four became seven, and seven became ten. Every day, I woke up, thought to myself, “I’ll get the bus tomorrow” and rolled over and went back to bed.

I’d walk out of my room into the common area overlooking the lake and slink down next to my friends. “What movie are we watching today?” I’d ask. Later, we’d go out for lunch, relax during the afternoon, and head out around town at night.

Phnom Penh was a city you just became stuck in. It sucked you in. It was laid back, cheap, and easy-going. The locals were friendly, polite, and helpful. The pace of life here was perfect for trapping other travelers, and our group got bigger by the day as more people fell into the black hole that was Phnom Penh.

However, as the days ticked down on my visa, I knew I’d have to leave. By the time I finally did, I’d fallen in love with the city.

I loved the gritty, Wild West feel the city had. Here the streets were still made of dirt, and cars and motorbikes raced around you in all directions as you gained on an ox cart. People swarmed the streets. The buildings were a bit run down from years of neglect. Yet this was a city of contrasts, with ritzy hotels standing next to abandoned buildings. Hell, they were still celebrating the arrival of ATM machines when I visited. The city was changing rapidly, and there was such contrast that the feeling of possibility was tangible.

Returning almost exactly five years later, so much of the city has changed and developed. Where before I had to walk miles for an ATM, there’s now one on every corner.

The most noticeable change is that the lakeside district, once home to all the backpacker guesthouses, is now gone. It’s a tragedy that corruption and greed pushed over 4,000 people out of their homes and ruined one of the city’s best areas.

There are more cars here, and every shop now seems to be a mechanic’s garage. The roads of the city are (mostly) paved; there are a few overpasses now. Traffic is even worse than before.

The city’s changed a lot since I was last here. There’s more money, nicer buildings, some shopping malls, and a lot more upscale restaurants. I’ve found some good sushi and Korean BBQ restaurants, which, given the influx of Korean and Japanese money, doesn’t surprise me much.

Yes, Phnom Penh is developing. But, while the face of Phnom Penh has changed, its heart has remained the same.

It’s still gritty, polluted, and full of dust. Buildings are still run down, lots remain empty, and the streets are still filled with chaos. People line the bars for hours on end on hot afternoons. Cars zoom past rickshaw drivers. People still laugh on the corner like they used to, and the old men play their domino games. Everyone’s in a hurry to get nowhere. Behind the façade, it’s still the crazy city it was back then.

Phnom Penh might not look like the city I fell in love with. Its exterior has changed so much that I barely recognized it. It’s a new city. But that happens a lot in Asia. The pace of development is so rapid that years seem like decades of change here.

All those years ago, I came to Phnom Penh not really expecting much. I didn’t know a lot about the city. I simply imagined it to be a run-down city with not much worth staying for. Yet Phnom Penh became and still remains one of my favorite cities in the world. I love Phnom Penh.

I was nervous coming back. When you walk away from a place with such fabulous memories, you can be scared to go back. What if you only liked the place for the people and you return to find nothing but ghosts? What if the place you remember is now only a dream? Will the magic be gone, leaving you with nothing but memories and disappointment when you return?

I worry about that a lot when I travel, but then I bite the bullet, fight the fear, and return to find that places can still be as wonderful as they were that first time around…even if everything is different.

Five years later, I love Phnom Penh even more. It may be different but that doesn’t mean it’s worse.

Book Your Trip to Cambodia: Logistical Tips and Tricks

Don’t Forget Travel Insurance
Travel insurance will protect you against illness, injury, theft, and cancellations. It’s comprehensive protection in case anything goes wrong. I never go on a trip without it, as I’ve had to use it many times in the past. I’ve been using World Nomads for ten years. My favorite companies that offer the best service and value are:

Want More Information on Phnom Penh?
Be sure to visit our robust destination guide on Phnom Penh for even more planning tips!