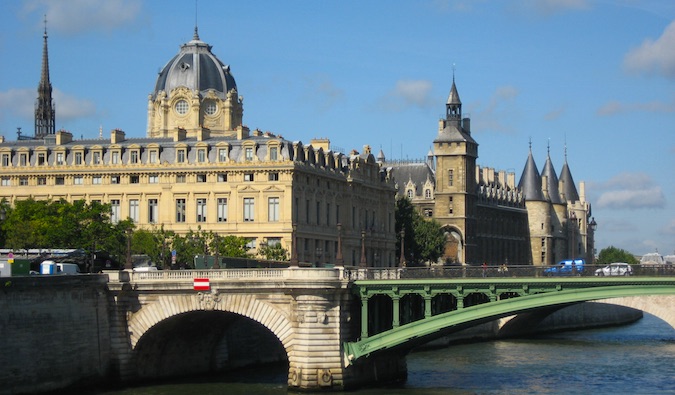 NOTE: This is one of the first articles I ever wrote. It’s not the best. But it’s part of my journey, so it’s staying on the blog. For more recent (and detailed) articles on Paris, click here.

Paris. Poets, artists, playwrights, writers, journalists, statesmen, and more have all written about the City of Light. A countless number of words have been written about this place. All came to Paris and walked away in love with it.

It’s hard not to fall in love with Paris. It’s a magical place and I can see why so many people flock to its streets. Paris exudes culture, sophistication, and style.

Settled by Gallic tribes around the third century BCE, the region was later conquered by the Romans around 52 BCE. They set up camp on the Left Bank, naming their settlement Lutetia. Christianity caught on in the area around the third century CE and by 508, Paris was made the capital of the Merovingian dynasty. The city was sacked by Vikings in 845 but recovered and repelled further Viking incursions. By the 12th century, Paris was the economic and cultural hub of all of France, and by the next century, it was the biggest city in all of Europe.

Today, Paris is one of the most iconic, sought-after destinations in the world. And, like millions before me, I fell in love with it the moment I arrived. I remember the exact moment too.

It was about midnight, and I had only been in Paris for two hours. I was meeting friends for a night on the town and hadn’t seen much of the city yet as I arrived late from Bordeaux. I had only seen the metro and the one block to my friend’s apartment, where I dropped off my bags.

But, the second we emerged from the metro station near the Arc de Triomphe and marveled at the Champs-Élysées, I was in love. Cupid shot his arrow right through me.

We spent an incredible night out on town, meeting locals, and partying until dawn. As we stumbled home in the morning light, I knew I’d always be connected to this city.

With just two days in town, I only had time to see the major sights and wander the city’s streets. (Edit: Since my first visit in 2008, I have been to Paris many times. I even moved there for a bit!)

One of the first things that struck me was how spacious it is. Paris is filled with wide streets, lots of little squares and plazas, and large parks. In European cities, especially ones as old as Paris, you rarely find such openness. Old buildings were usually built close togethe, and any trip to London, Barcelona, Rome, or Prague will have you wondering how people moved about through such claustrophobic streets.

But Paris is different.

There’s a lot of open space here. It makes the city feel much less busy and far more relaxed. You can walk, you can move. It’s refreshing. (I later found out that’s because, during the 1850s, the streets were widened and modernized to what you see today.) 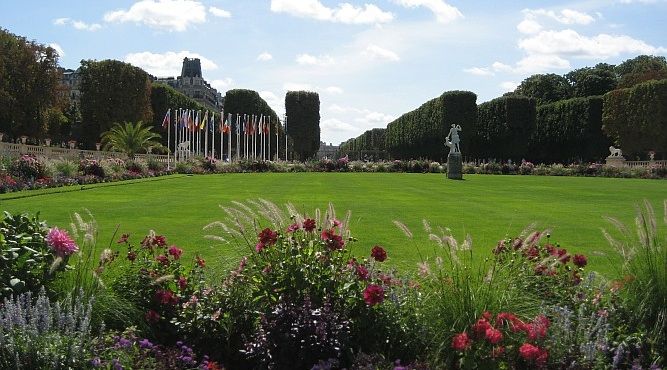 With limited time, I stuck to the major sites in the city’s center. I strolled the Tullieries and wondered if Dan Brown would use the Louvre again in future books. (I didn’t go in, though — the Louvre deserves more time than I could give it on this trip and I was in a rush. It would have to wait.)

The highlights of the trip came on my second day there. I spent six hours wandering the streets of Paris, falling in love with it more and more. The city is beautiful. Stupidly beautiful. All of it.

I especially enjoyed the Latin Quarter. This historic area featured tiny, winding streets that turn at weird angles and open onto little café-lined squares. Despite being so close to Notre Dame, there were few tourists wandering around. The streets there were much quieter than elsewhere, and it seemed like a nice area to eat and relax in. I was glad to get lost in it for a while. 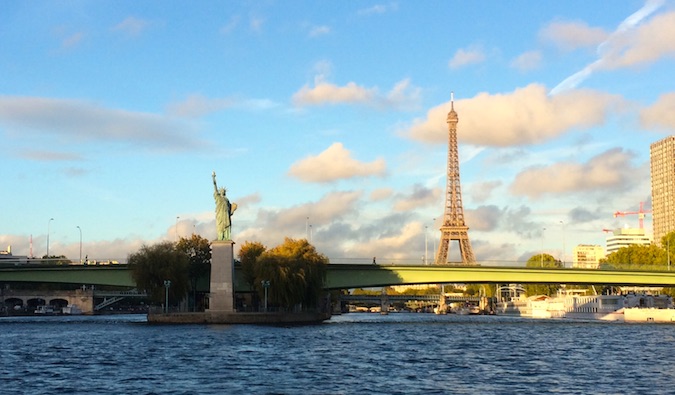 Another place I loved was the Jardin du Luxembourg. Spanning over 56 acres, this huge garden behind the Palais du Luxembourg is a local favorite on a warm summer day. Tree-lined paths zigzagged across the area, connecting to parks to picnic or nap in and tennis courts to play on. There’s a large central fountain and a little place to race boats too. It was filled with people relaxing and eating and enjoying life.

One thing that amazed me about the gardens was the large number of chairs everywhere. In fact, most parks in Paris had chairs. Chairs that were not tied down, because no one takes them. They’re just there. In most other places I’ve been, people would steal the chairs, and slowly they’d disappear, too costly to replace. But not here. People just let them be!

And how could I forget the two biggest sights: the Eiffel Tower and Notre Dame.

If I’m being honest, the Eiffel Tower wasn’t that impressive the first time I saw it. It was raining, and the tower seemed to blend into the gray clouds overhead. Yes, it was cool, but it wasn’t breathtaking. Then I saw it a second time. On a clear blue day, the tower stuck out in the sky, reaching high above the surrounding buildings. Walking toward it, I got more excited, and when I saw it towering above the Seine, I was impressed. Really impressed.

However, I was not impressed with the two-hour wait to get to the top and so skipped that. But what a sight! The Eiffel Tower, or the “metal asparagus” as Parisians used to call it, is mesmerizing. It’s the symbol of the City of Love, which is evident by the large number of couples caressing each other on the surrounding grass. 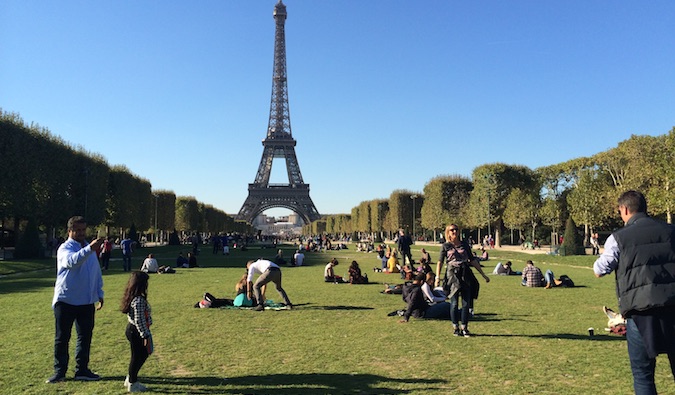 Notre Dame was cleaner than I thought it would be. I expected a grim structure, giving the Gothic architecture an even darker and mystical feel. Sadly, it seems the building has been cleaned over the last few years. I think it takes away from the history and foreboding of the structure. C’est la vie, though, right?

The real beauty of Notre Dame is its buttressed oval rear. This part is breathtaking, and the Gothic art is very intricate and well designed. The downside is the sea of tourists who crowd this place each day. They swarm around like bees to honey. 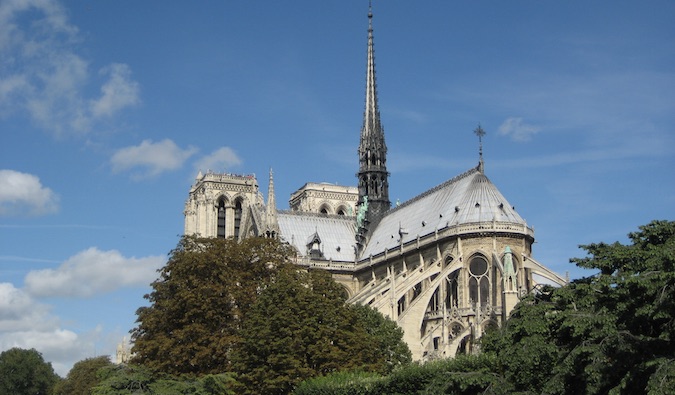 In short, Paris was amazing. I loved it all and will come back as soon as I possibly can. There’s a vibe to this city that connects with mine and I felt like the two of us just belonged together.

My next post will give tips for traveling around the city and offer more practical advice. But this is my Paris love story. So many of us have one.

Book Your Flight
Use Skyscanner or Momondo to find a cheap flight. They are my two favorite search engines, because they search websites and airlines around the globe, so you always know no stone is being left unturned. Start with Skyscanner first though, because it has the biggest reach!

Book Your Accommodation
You can book your hostel with Hostelworld, as it has the biggest inventory and best deals. If you want to stay somewhere other than a hostel, use Booking.com, as it consistently returns the cheapest rates for guesthouses and hotels. My top favorite places to stay in Paris are:

If you’re looking for more places to stay, here for my favorite hostels in Paris.

And if you’re wondering what part of town to stay in, here’s my neighborhood breakdown!

Don’t Forget Travel Insurance
Travel insurance will protect you against illness, injury, theft, and cancellations. It’s comprehensive protection in case anything goes wrong. I never go on a trip without it, as I’ve had to use it many times in the past. My favorite companies that offer the best service and value are:

Need a guide?
Paris has some really interesting tours. My favorite company is Take Walks. It has expert guides and can get you behind the scenes at the city’s best attractions.

If you want a bike tour, use Fat Tire Tours. It has the best and most affordable bike tours in town.

Want more information on Paris?
Be sure to visit our robust destination guide to Paris for even more planning tips!