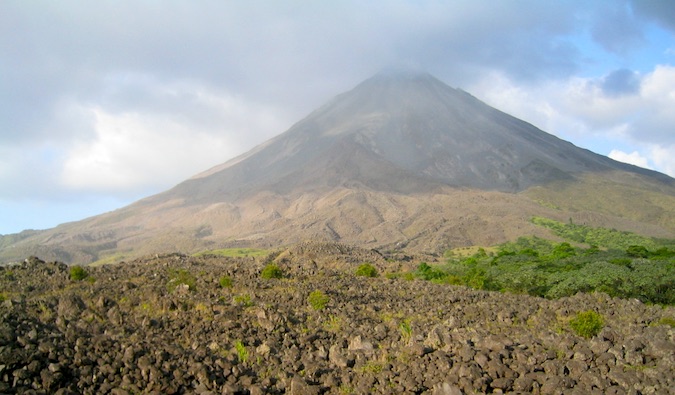 “Let’s go hiking in Arenal,” I said one early morning at breakfast.

“OK, we’ll go after lunch,” said Gloria and Lena. Gloria was a thirty-something olive skinned Spanish woman and her friend Lena, a short Latino with jet black hair from Chicago. Both were the only native Spanish speakers on the tour and helped me greatly improve my Spanish.

We were in Arenal, a small town up in central Costa Rica famed for its active volcano of the same name, caving, lake, hot springs, and gigantic waterfall. It was a stop on everyone’s itinerary, a place to embrace that pura vida lifestyle. During the day, smoke rose from the volcano as lava oozed out of it casting a dusty appearance to the mountain. At night, flashes of red let you know lava is oozing down its side.

It was our second day there and I wanted to hike some of the (safe) trails around the mountain and catch the sunset over the lake. Hiking in Costa Rica is one of the top things to do in the country and I wanted to do as much of it as possible.

We told the cab driver we’d be back at the park entrance at six and started off on our adventure to watch the sunset over the lake. We headed into the jungle, which often quickly thinned out to rocky trails spreading out like spider veins from the side of the mountains. These were remnants of eruptions long past. Dead earth that was slowly coming back to life. We wandered off the train and down these gravel paths, finding where they led. This was an adventure. I felt like Indiana Jones. I jumped over rocks and climbed boulders, getting Gloria and Lena to take photos of me. I followed unknown local animals around.

Returning to the official trail, we walked towards the lake. On the way, we consulted the vague trail map our hotel had given us.

“I think we’re at this cross-section,” I said pointing to a spot on the map. “We passed these lava fields a bit ago so I think if we keep going a little more down that way, we’ll get to the lake.”

Gloria leaned over. “Yeah, I think so too. We have a few hours until sunset so let’s keep hiking. We can loop around these side trails and then get back to the main trail.”

As the sun began to set, we turned back towards the lake. 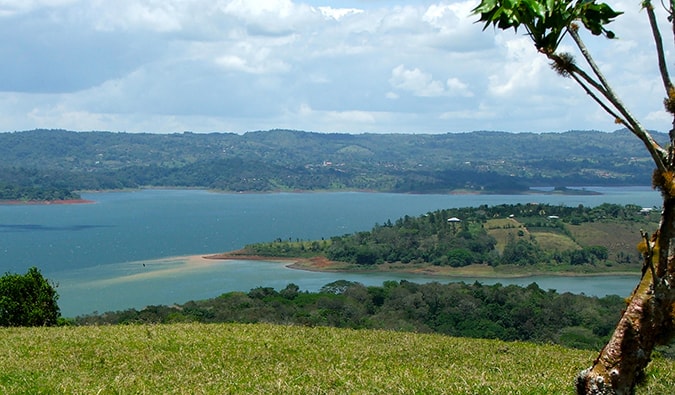 We weren’t a 100% sure what cross trail we were on. The map was vague and had little reference to distance.

“Maybe we walk back two junctions and we’ll hit the main trail. There’s this other trail but I dunno if we are close.”

As we consulting this map, a few hikers passed us.

“Excuse, can you tell us where we are? Which way to the lake?,” I asked.

“Just go back and take a left at the sign,” said one of the guys as he passed, gesturing vaguely as he pointed.

As they continued on, we looked at the map.

“If he said that way, then we must be at this crossroads,” I said pointing to a junction closer to the main path. “That left must be this other path we were just looking at.”

We proceeded in the direction he told us and took a left.

But, instead, our trail instead kept going and we soon found ourselves deeper into the forest. There was no junction, no turn-off. Our guess at the junction was wrong. As the sun set overhead and sky turned a deep pink, we became more and more lost. We went down trails that ended abruptly. We doubled back, found new trails but kept going around in circles. Day turned into night. Mosquitoes came out to hunt their confused prey (us), and animals came out to frolic, no longer scared off by a thousand hiking tourists.

Twilight set in and our flashlights batteries died. All we had to guide us was the light from our cameras. We had no food or water. This trip was only supposed to last a couple of hours. We were unprepared.

“We need to find a point that we recognize and then work from there. We’re going around in circles,” Lena said.

She was right. We were making no progress.

The thought of spending a night in the jungle was making us edgy. Our tour group would be feasting on a huge dinner while we found our way out of this mess. Would we have to spend the night here? When would they start to worry about us? Would it be too late by then? The park wasn’t that big but we were essentially wandering in the dark. 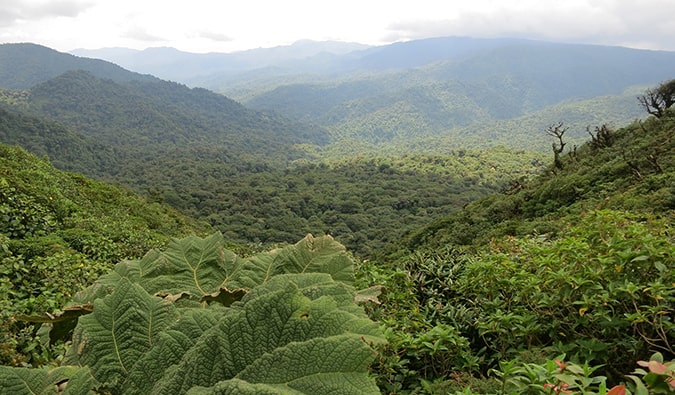 We came to a fork in the road.

“I remember this place,” I said.

“I think we go….that way,” I said pointing to another path. “The map shows a dirt road at the end. Roads mean cars. Cars mean people. People means back in time for dinner.”

Following the trail, we eventually came to a dirt road. It was on the map and had a science station marked on it. One way led to it, the other to the main road. Figuring we were at least in the right direction, we turned left into the darkness.

We’d picked the wrong way though. In front of us was the gate to the science station. Conversing in Spanish with the guard, Gloria and Lena told him our situation. He informed us we couldn’t call a cab from there and we’d have to walk twenty minutes back to the main road, try to catch a ride there, or walk back to town.

The road was empty when we got there. Tired and hungry, we began our long walk home in silence. Eventually, a car picked us up.

Once inside, we became animated again, talking and laughing about the whole experience.

“Ya know, in retrospect, we have a good story to tell the group,” Gloria said. She had gone silent in anger during the walk.

Back at the hotel, our tour group was on dessert. Everyone looked at us in our dirty clothes and asked, “Where were you guys? Why did you miss dinner?”

We looked at each.

“It’s an interesting story but first we need some food. We’re starving,” we said with a smile.

It was an Arenal hiking adventure I wouldn’t forget.

Want More Information on Costa Rica?
Be sure to visit our robust destination guide on Costa Rica for even more planning tips!