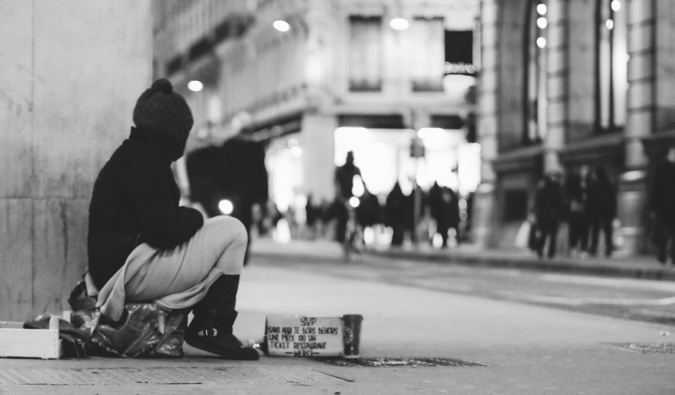 “Now, if I buy all your flowers, you’ll go home, right?” said the Aussie girl next to me.

“Yup,” said the little girl selling roses as she handled the bundle to my friend.

We were in Bangkok and I was watching my Aussie friend take pity on a little Thai girl selling flowers to drunk backpackers on Khao San Road.

Handing over the money, the little girl smiled as my Aussie friend bought all her flowers. My Aussie friend smile back, feeling good about herself and confident that she had kept a little girl from staying up all night, sending her home to get rest for school tomorrow.

“Oh, what the hell!” I heard her say about 30 minutes later. I looked up and there, across the street, was the little flower girl, selling a new batch of flowers.

My friend was clearly disheartened. She felt as though she had done some good, only to realize a cruel reality of Thailand (and many other countries): kids don’t go home until their parents say so.

Having lived in Bangkok, I knew this was going to happen. My other friends and I had warned her not to buy all the flowers, that the little girl’s parents would just send her out again.

But she didn’t listen.

And now that I’m back in Thailand and I see beggars and little kids again, wandering the streets asking for money, I wonder if giving is doing any good or just supporting a flawed system.

In much of the developing world, you see kids selling trinkets and flowers to Westerners. You see parents begging with a kid “asleep” in their lap in order to gain sympathy. The parents know what we know: it’s hard to say no to a kid. You automatically feel bad for them. You think about the poverty they live in, the life they lead, and think, “Well, I’ll give a little bit and help out.”

After all, if it was you out there living on the street, wouldn’t you want some charity to help you make it to the next meal?

Then again, if people weren’t giving, many of those kids wouldn’t be there.

And as much as people protest and shoo the kids away, many other people open their wallets in hopes of doing some good. We look at the woman with the baby in her arms, reach into our pockets, and go, “OK, just a little bit.”

When I see these beggars on the street, I’m often torn on what to do.

On the one hand, I don’t want to perpetuate the system. I don’t want the children to be out selling trinkets instead of learning in school. I don’t want parents using their children as a shortcut to quick cash. I don’t want kids to be used as emotional blackmail. I want them asleep at 10pm, not dealing with angry, drunk tourists who are annoyed at them.

Yet I know that many poor families often do this out of necessity. Nobody is doing this for fun; they simply need the money.

As I mull over the complexities of the topic, I often think about Bangladesh. Back in the 1990s when child sweatshop labor became the cause du jour, the focus was on Bangladeshi sweatshops. There were boycotts. A crying Kathy Griffin. An uproar. Legislation. Clothing manufacturers cracked down on suppliers who hired children. Child labor decreased, and Westerners could sleep easy.

Yet years later I remember reading a newspaper article on a study that followed up on what happened to the children in Bangladesh. Turns out, they didn’t go to school. They ended up on the streets as beggars. The families needed the income for food. And if they couldn’t work making clothes, they could work on the streets.

After all, the need for food trumps all other needs.

I remember once walking past this guy and his kid in a part of Bangkok I went to often with my friends. The man sold some junky stuff I didn’t want. But one day I walked past him, and the desperation, the pleading in his voice just made me stop.

I’d never seen such a sincere look of desperation on someone’s face as I did that night. I don’t know if it was all part of the “get money” game, but I just couldn’t look at that guy with his kid and stuff no one wanted and not be moved. I pulled out my wallet and handed the guy 1,000 baht (a little over $30 USD). He was dumbfounded by the money, but I just couldn’t walk past him anymore without helping. The sadness in his eyes was just too palpable.

Giving money to beggars often represents more than a black-and-white choice between supporting and not supporting a flawed system. Many of these people lack any real social support structure that can help them out of poverty. Thailand has no social assistance program. Neither does most of the developing world where you see such abject poverty and so many beggars.

They’re on their own.

And so, despite hating the system, I usually give. If there’s change in my wallet, I give it to the homeless and beggars of the world. It’s simply too hard to say no. My heart breaks for them.

What do you do? Do you give? Do you not give? What’s the answer here?

Obviously, the answer is a sweeping structural change to ensure that nobody falls through the cracks of the social system. More nuanced welfare systems, improved job training, affordable childcare — the list goes on. But that isn’t anything we can really fix as backpackers. Sure, we can donate to organizations working on those issues — and we should.

But what can we do in the moment, when a desperate mother stretches out her hand asking for help?

Do we offer her a few coins? Or, do we tell her, “Oh, I actually donated to a charity to help you” instead? That doesn’t really seem fitting (or respectful) to me.

At the end of the day, it’s a complex issue. The poor and homeless and impoverished are people too. They have needs and wants and dreams like the rest of us. And sure, there are going to be some scammers in there trying to make a quick buck. But most of the people out there are there because they have to be. Not because they want to be.

So until the systems change and improve — which many around the world are — I’ll keeping offering up my pocket change when I can. It isn’t much, but it doesn’t have to be.

Because if the situation was reversed and it was me on the street, that’s what I would want.

Book Your Accommodation
You can book your hostel with Hostelworld as they have the largest inventory. If you want to stay somewhere other than a hostel, use Booking.com as they consistently return the cheapest rates for guesthouses and cheap hotels. I use them all the time.