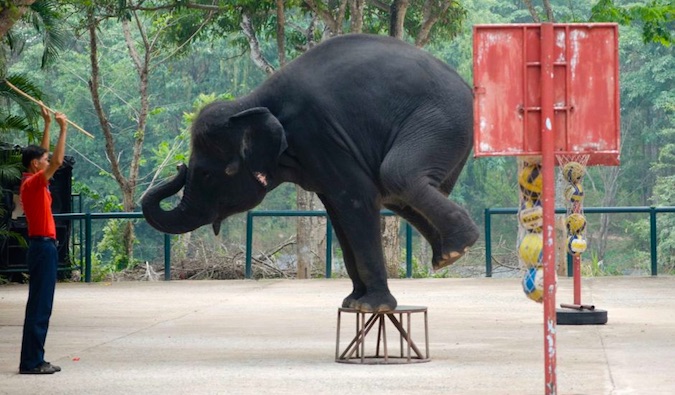 While I was in Sigiriya, Sri Lanka, eating kottu (a traditional spicy stir-fry of shredded roti bread with vegetables and chicken), I noticed a scene outside the restaurant that I’ve witnessed too many times before: tourists riding an elephant. I sighed in despair. That animal they were so happily riding was mostly likely abused – and they either had no idea or they simply didn’t care.

I understand their desire to ride that elephant.

We all love seeing and interacting with animals when we travel. It feels exotic.

It’s why we go on safaris, visit zoos and tiger temples, and sign up for elephant rides, go gorilla trekking, take lion walks, and everything in between.

I mean, who wouldn’t want to be that close to so many beautiful creatures? Animals are cute and (mostly) furry.

But I have some bad news: almost all animal-based tourism in the world is abusive and detrimental to the animals.

Animals are typically kept in horrible conditions and trained and managed by inexperienced staff. These aren’t scientific research centers you are visiting. The places you visit exist for your entertainment and money — not for the animal’s welfare.

Now, I’m no saint. I’ve done bad things in the past. I’ve ridden elephants, been to the tiger temple, visited Seaworld, and swam with dolphins. I’ve been guilty of patronizing the same places I am now telling you to avoid.

But the longer I work in the travel industry and the more learn about animal tourism, the more I’ve come to realize just how messed up, flawed, and abusive it is. If I knew then what I knew now, I would have never done those activities.

Chances are you’re like me and see these activities and think “Animals! Yay!”

There’s a false belief that these activities must have some regulations and are safe for animals. I mean that’s what I thought. I didn’t know what I didn’t know.

But that is not the case at all.

By visiting these institutions, we unintentionally become party to the system and perpetuate the cycle of abuse.

We don’t do it because we’re bad people. It’s simply ignorance of conditions that keeps us from changing the system.

I know we all want to believe that the place we’ve chosen to visit is harmless. We’ve done some research and read some positives reviews that said how kind and helpful the staff was to the animals. It looked safe.

But who would admit to animal abuse? Who would leave put that in the open?

All of it is hidden from view.

No organization is going to say, “Yeah, we starve the elephants. Come on in!”

Elephants are expensive to keep and, when saddled with debt, many trainers simply push their elephants to their limits in order to make as much money as possible. And, while the trainers may have their hearts in the right place, in many developing countries these aren’t professionally trained staff or biologists — they are poor, underskilled workers who are just trying to make money to feed their family.

Look at the elephant who killed someone in Ko Samui. He was working in unbearable heat and shouldn’t have been carrying riders, but the trainer was a poor Burmese immigrant who was in Thailand just trying to feed his family.

If you look at the trainers interviewed in The Cove or Blackfish, you see the same thing: trainers with good intentions but also a boss or corporation focused on profits instead of animal welfare.

For years, animal rights and environmental groups railed against the Tiger Temple in Thailand. Journalists reported abuses. Yet tourists didn’t believe the news and still flocked to the temple. “They’re monks. How could they hurt the tigers?”

Yet, after outside pressure grew too great, the government raided the temple and — shocker! — found a host of abused and dead tigers, and evidence of illegal breeding and animal smuggling. But even though this tiger temple proved to be involved in the illegal animal trade, visits to other tiger temples haven’t stopped.

The truth is there is a lot of animal abuse in the travel industry.

And it should be avoided. The chance of error is far too great. The problem is more widespread than you think.

Elephant rides, tiger temples, lion walks, monkey shows, orangutan fights (yes, that really exists), dolphinariums, Seaworld, circuses — anything where the animal is there exclusively for your entertainment should be avoided!

Consider the smell test for any animal exhibit: if it seems like this shouldn’t exist or you find it weird that such a large animal would be so docile, something is probably not right and you shouldn’t be supporting such practices with your money.

We can still get that memorable moment with an animal while making sure we are doing good.

Take elephant riding in Thailand. It’s been popular for decades and is still a big draw for tourists, but places like Elephant Nature Park are changing the system by providing a sanctuary for abused elephants, promoting education for visitors, and allowing tourists to experience the elephants in an unharmful way.

There are now parks in Phuket, Cambodia, and Surin.

That’s not to say this change is widespread, but since it’s money that perpetuates the system, the more people vote with their dollars, the more animal parks will change their policies. Elephant Nature Park wouldn’t exist without tourists visiting, and other parks wouldn’t be taking notice if it weren’t for the popularity of their practices.

It is important we do our due diligence and vote with our dollars to support organizations that are doing right by animals.

If we stand together and say “we want something else,” we can make it happen. The tiger temple was finally shut down, Seaworld has agreed to stop its captive breeding program, and places similar to the Elephant Nature Park are proliferating all over Southeast Asia.

These changes have come about because of public outcry and changed consumer behavior that affects what businesses care most about: their bottom line.

It’s about education. If we as travelers learn about these conditions beforehand, if we talk about them more, we can make a change.

Thankfully, there are a number of online resources and groups out there that can help you find ethical animal experiences:

I know you want to see or commune with some animals when you travel and there’s nothing wrong with that – let’s just do it in a responsible way. Let’s create positive animal experiences that reward conservation and education, not exploitation.

After all, don’t you want to come back one day and share with your friends or family the beautiful experience you had? The best way to pass the experience on to others is to ensure that the animals survive and thrive.